With Launch of Tablet PCs, Pen-Based Computing Is a Reality

REDMOND, Wash., Nov. 7, 2002 — It’s been a while since handwriting made history — about 3,500 years, in fact, since Sumerian tradesmen began etching lists in clay. With today’s launch of the Tablet PC, Microsoft and its partners make handwriting news: The Tablet PC joins handwritten input and digital processing to make pen-based computing a reality.

That’s good news for mobile corporate workers, who can now bring the full power of a PC to situations where a keyboard and mouse are inconvenient or inappropriate.

The Tablet PC delivers enterprise workers the full resources of a notebook computer. But by incorporating the convenience and familiarity of pen and paper into the PC experience, it extends the way they can work with their PCs.

“Tablet PCs are a major milestone in mobile computing, bringing more versatility and computing power to more places than ever before,”
says Alex Loeb, corporate vice president of the Tablet PC division at Microsoft.
“The Tablet PC delivers new ways to communicate, collaborate and be productive, vastly extending the ways in which people will work and enjoy their PCs.”

Today, computer hardware manufacturers will release Tablet PC models in a variety of styles designed to meet the needs of a wide array of workers and consumers.

The Tablet PC is a new kind of computer, representing an evolutionary step in the development of the notebook or laptop computer used today by mobile workers. The Tablet PC is built on a new Microsoft operating system, called the Windows XP Tablet PC Edition, a superset of Windows XP Professional. This means that the Tablet PC platform has the same high level of functionality as other computers running Windows XP Professional. It also supports all legacy Windows applications and provides a powerful foundation — including the .NET Framework — for developing new Windows-based applications that support Tablet PC digital pen and ink capabilities. 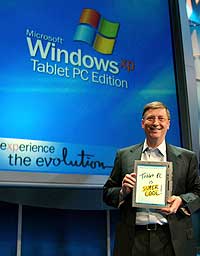 “It’s important to understand that notebook users don’t give up anything when they switch to a Tablet PC,”
says Loeb.
“The Tablet PC runs on Microsoft’s most powerful operating system. It’s also one of the most mobile computers ever developed. There are no compromises with the Tablet PC: It has all the functionality of a traditional laptop, plus more.”

That
“more”
Loeb cites is allowing users to choose how they input and manipulate data. The Tablet PC is built with an electromagnetic screen that allows users to write or draw with a digital pen. The screen digitizes the pen movements and displays them as handwritten or drawn
“ink,”
and makes the hand-scripted text available to a handwriting recognizer, which translates the handwritten words into standard text in typeface. This text can then be pasted into Microsoft Outlook e-mails, Excel spreadsheets, or Word documents and sent to other Windows-based platforms and devices.

A Tablet PC user can also employ — or attach — more traditional input mechanisms, such as a keyboard or mouse, to operate the computer. All Tablet PCs come with keyboards. The Tablet PC also includes voice-recognition software that enables the use of voice to command and control applications as well as input text.

One of the breakthroughs of the Tablet PC is its support of
“ink as ink.”
The Tablet PC not only features a highly accurate handwriting recognition engine — with support for U.S. and International English, French, German, Japanese, Korean and Traditional and Simplified Chinese — it also gives users the option of preserving digitized handwritten text as digital ink. (See link to related feature at right.) That means they function as a data type, such as numerals or text in typeface, which can be exchanged, manipulated, saved and searched across Windows-based applications and devices. For instance, handwritten text on the Tablet PC can be sent and received — as handwriting — in e-mail, while documents with handwritten notes and doodles can be saved as Word files.

Tablet PCs come with Microsoft Windows Journal, a note-taking feature that allows users to create and organize handwritten notes. Windows Journal captures the text, diagrams and pictures that users would typically handwrite on pads of paper. On a Tablet PC, these notes and doodles can be saved and exported to co-workers, clients and network systems. Users can write directly on the screen and save electronic notes in their own handwriting — or they can be converted to typed text.

“The Tablet PC gives users a wide range of options and opportunities because of its highly mobile size and weight,”
says Loeb.
“It has all the power of a fully featured notebook PC, but it can go where traditional notebooks have seldom dared. Because it allows pen-driven input, it can also go places where previous notebook computers were not appropriate or convenient — the digitized screen makes data input as natural as handwriting. Anywhere you are able to scrawl a note is now a place where you can bring the full power of a PC.”

Microsoft developed the Windows XP Tablet PC Edition platform that underlies the Tablet PC, and has licensed the operating system to hardware-maker partners (known as OEM’s, for original equipment manufacturers) who are building a variety of Tablet PC models upon the base software. (See link to related feature at right.) In addition, application service providers are engaged in writing new and innovative programs that utilize digital ink and the Tablet PC platform.

“Our OEM partners know their customers’ needs and requirements,”
says Loeb.
“We trust them to take our underlying software and develop Tablet PC models that will address and capture their market needs. The result is a compelling array of models that speak to individual facets of the evolving Tablet PC market.”

Convertible Tablet PCs are designed for use by knowledge workers and the growing population of
“corridor warriors.”
These are corporate workers who need a highly mobile PC on which to take notes and remain in wireless contact while in meetings, in conferences, or in between. Because taking notes on the Tablet PC is less disruptive and more natural than typing on a keyboard, it enables users to be more productive in more environments than ever before.

The other general Tablet PC style is the
“pure tablet”
or slate-style computer. These computers are built to be highly mobile, and some are optimized for rugged weather and tough treatment. In situations where inputting information via a keyboard is inconvenient or impossible, the natural handwriting interface opens up many new computing opportunities. Utility readers, forestry inventory takers, law-enforcement agents, emergency medical-response personnel, livestock growers, as well as note-taking knowledge workers who want the most mobile PC model on the market — each of these vertical industry groups will benefit from Tablet PCs that enable natural input mechanisms such as handwriting and speech input in ultra-portable designs.

In addition to an array of hardware options to address the needs of various usage situations, Microsoft development partners are writing new applications for the Tablet PC that take advantage of the
“ink-as-ink”
capabilities of the Windows XP Professional platform. Windows XP Tablet PC Edition is the first Microsoft product to be shipped with the .NET Framework built in from the ground up. The infrastructure at the heart of the Tablet PC makes software development easier and less expensive. The Tablet PC is the optimal computing device to deploy for a mobile workforce and the ultimate .NET client for connecting to the Internet.

“The Tablet PC is an important evolution in the history of computing,”
says Loeb.
“It delivers a level of freedom never before offered to PC users. Today, a user doesn’t have to compromise on power and performance in order to gain flexibility and mobility. And a user has the freedom to choose how to interface with a computer, depending on situation, convenience and preference. Our partners have worked hard to develop Tablet PC models and software to make this the most flexible and useful computing device ever.”

In many companies, employees spend much of their day rushing between meetings, making presentations, and holding client conferences – for these workers, not much time is actually spent at a desk. These
“corridor warriors”
spend little of their day at their desktop computers and often find that their notebook computers are of limited use in situations where there’s little opportunity or elbowroom to boot up a traditional laptop. In other meeting situations, typing on a notebook keyboard is a distraction — or worse, an affront — to other people in the room.

Tablet PCs provide everything that enterprise users expect in a mobile PC, but also allow these employees to be productive in more situations — at a desk, in the hallway, at a meeting or on the go. With a Tablet PC, employees can create and organize handwritten notes, as well as capture text, diagrams and pictures that are usually scrawled on a paper pad. With built-in wireless support, the Tablet PC makes it simple to collaborate with co-workers and clients, who can share handwritten documents with other PC users regardless of whether they have Tablet PCs or not. Critical enterprise data receives the highest level of security protection, including file encryption.

Among
“virtual office”
examples of Tablet PC use: