Over the years, artists, writers, filmmakers and game developers alike have all attempted to rationalise the concept of Artificial Intelligence (AI).  In fact, the idea of advanced robots with human-like intelligence dates back to at least 1872 with Samuel Butler’s utopian novel, Erewhon.

Historically, AI has been a recurrent theme in science fiction, whether depicted in a utopian fashion, highlighting the possible benefits of AI to humanity, or dystopian, stressing the dangers. More often than not, AI is portrayed as the antagonist, brutally hostile to humans, and intent on usurping control over civilisation.

In 2018 where the concept of AI no longer dwells in the realm of pop culture, nothing could be further from the truth.

2018 has been a significant milestone for AI. Indeed it’s materialised into a sort of “Coming of Age” for this emerging and transformative technology. All the pieces are falling into place for AI to become a reality – big data and the cloud, developments in hardware, powerful algorithms and increased computing power, as well as an open source community that decreases barriers to entry for businesses and individuals.

The result is that AI is being catapulted out of research labs and off the pages of sci-fi novels, and into our everyday lives, from helping us navigate cities and avoid traffic, to the use of virtual assistants to assist us perform various tasks.

But the challenge goes further than building human-friendly AI applications to understanding how we can use AI for the overall good of society. Using AI for good
In a recent blog post, Brad Smith, President and Chief Legal Officer at Microsoft, highlighted how persistent humanitarian crises caused by natural and man-made disasters, oppression and other emergencies have plagued our world as long as time itself. While global relief organisations scramble to respond to these events, their work by definition is often reactive and difficult to scale.

According to Smith, AI and data science, combined with the expertise of groups around the world in fields such as environmental science, disability needs and humanitarian assistance, will help save more lives, alleviate suffering and restore human dignity by changing the way organisations predict and target response efforts.

His sentiments are echoed by Lucas Joppa, who leads the AI for Earth programme at Microsoft. The five-year, $50 million cross-company programme is dedicated to deploying Microsoft’s 35 years in AI research and technology in the four key areas of agriculture, water, biodiversity, and climate change.

“We believe AI can be a game-changer in addressing pressing societal challenges and creating a better future,” says Joppa. “Perhaps nowhere is that potential greater than the continent of Africa, where early adoption of AI tools in areas like agriculture or conservation can yield environmental benefits as well as economic benefits from better management of natural resources to the upskilling of the workforce.”

AI for Earth – Helping save the planet with data science

We know that industrialisation has been the cause of many of the world’s current environmental problems. For example, climate change, which has been a buzzword in recent years – and with good reason – is expected to cause a 2°C increase in average temperatures across the world by the end of the 21st century. Greenpeace also predicts that over 180 million people in sub-Saharan Africa alone could die as a result of climate change by the end of the century.

Other environmental issues like air pollution, the depletion of fishing reserves, contaminants in rivers and soils, waste on land and in the ocean, loss of biodiversity and deforestation can all be traced to industrialisation, and the outcomes are dire unless we take drastic and immediate action.

Fortunately, we have arrived at a unique and unprecedented point in human history. We are ushering in what’s become known as the Fourth Industrial Revolution, and we are seeing the convergence of our digital, physical and biological worlds. There has never been a better time to harness this transition into digitalisation, and the societal shifts it stimulates to solve environmental problems and reshape the way we manage our collective global environment.

According to the World Economic Forum (WEF), if we get it right, it could create a sustainability revolution.

Recognising this unique opportunity, Microsoft and National Geographic announced a new partnership to advance research on critical environmental challenges with the power of AI. The newly created, $1.2 million, AI for Earth Innovation Grant programme recently awarded 11 change-makers between $45,000 and $200,000 to support their innovative projects in areas of agriculture, water, biodiversity and climate change. 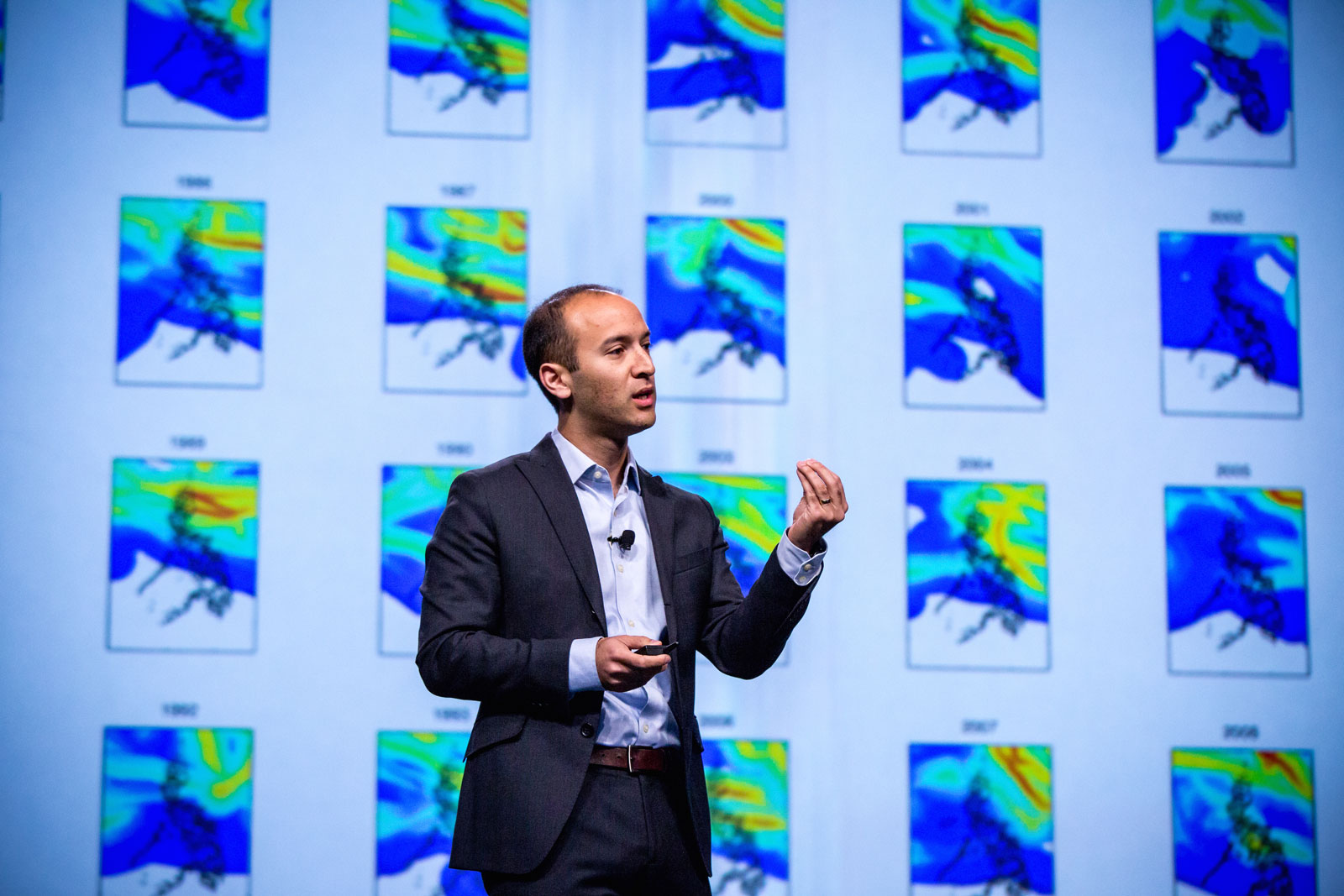 One of these change-makers is Solomon Hsiang, whose research focuses on understanding the effect of climate change on human migration in Africa. He does this by using 1.6 million historical aerial photographs collected by the British Royal Air Forces who used retired spy planes from the two world wars to survey countries that were under British rule at the time. As a result, millions of photographs were taken of the landscape over the last century across Africa. Solomon and his colleagues decided to digitise these photographs and apply machine learning and AI tools to create new population maps of Africa over time to understand how climate change impacts human migration patterns. “I think everyone in the world ought to care about the implications of climate change because we’re all contributing to it”, he says.

One grantee using her considerable expertise to solve one of Africa’s most urgent problems is Dr. Mercy Lung’aho who is a nutritionist and research scientist at the International Centre for Tropical Agriculture. She is tackling the issue of chronic malnutrition in Africa with an AI-powered diagnostic model designed to prevent a nutrition crisis before it occurs. The Nutrition Early Warning System (NEWS) is currently in its inception phase and will be built on the Microsft Azure platform through a grant provided by the Microsoft AI for Earth programme. Another grantee using her skills in computer science and geography is Ketty Adoch, who has been passionate about applying technology to environmental challenges for most of her professional career.

Her project focuses on the Murchison Falls National Park in Uganda. As Uganda moves from crude oil exploration to oil production, civil society organisations in both Uganda and neighbouring Democratic Republic of Congo (DRC) have raised concerns over the potential impact of these activities on people’s livelihoods, wildlife conservation efforts and tourism. Ketty’s project therefore seeks to use AI to detect and quantify land cover change over the past decade to highlight evidence of urbanisation and infrastructure development. This is all done in an effort to support the work of researchers, scientists and conservationists in the area.

Microsoft has long been a proponent of supporting nonprofits with cash and technology to help further their work in driving greater social and environmental impact. One of these nonprofits is Peace Parks Foundation, which is an organisation with a dream to reconnect Africa’s wild spaces in order to create a future for man that exists in harmony with nature.

A large aspect of their work focuses on anti-poaching efforts in South Africa, where an epidemic to systematically slaughter rhinos rages on. In 2017, a total of 1,028 rhinos were poached throughout the country and the scourge doesn’t look like it’s going to end in the foreseeable future. Microsoft’s support includes an AI for Earth grant to further their Smart Parks system and improve their anti-poaching interventions. Microsoft’s AI capabilities have also been deployed to analyse images from a network of connected camera traps to enable autonomous poacher detection.

In addition to helping save the planet, AI is increasingly being used to empower people living with disabilities with tools that support independence and productivity. One example of this in action is a free app called SeeingAI, which narrates the world around you.

The app was developed by Saqib Shaikh, a software engineer who understands first-hand the challenges of being visually impaired. Saqib lost his eyesight at the young age of seven and is now dedicated to using technology to build a more inclusive world.

Using Microsoft Cognitive Services APIs and machine learning, the engineers built “Seeing AI,” which can read text out loud, recognise people and their emotions, and even describe everyday scenes.

Seeing AI can be paired with another Microsoft app called Soundscape that empowers individuals with blindness or low vision to explore the world around them through a 3D audio experience.

AI can also be used to empower other marginalised groups in society. Earlier this year, the Sage Foundation partnered with the Soul City Institute for Social Justice in South Africa to launch rAInbow, an AI-powered smart companion to support victims of domestic violence.

The smart companion was created following focus groups, where victims of domestic violence were interviewed to better understand how they seek help. South Africa was chosen because the country has the highest reported rate of femicide in the world, yet domestic violence remains a taboo due to the stigma and shame associated with it, among other reasons.

Enter rAInbow, the smart companion that can be accessed via Facebook Messenger, offering a safe space for victims of domestic violence to access information about their rights, support options, and places where they can find help – in friendly, simple, and easy to understand language.

According to Kriti Sharma, the brainchild of rAInbow, “rAInbow does not pretend to ‘be human’”. It incorporates a blend of conversational language with familiar technology to make it feel as informal and relaxed as speaking to a friend.

“More and more people are beginning to realise the potential of exponential technologies and innovation to solve social challenges. We expect rAInbow to give us insights that can lead to social and governance reform, which can significantly contribute to ongoing change and improved safety of women in society,” she adds.

It’s in a similar vein that Microsoft announced the launch of a new, $40 million, five-year programme called AI for Humanitarian Action, which will use AI to help the world recover from disasters, address the needs of children, protect refugees and displaced people and promote respect of human rights.

Modelled after the AI for Earth and AI for Accessibility initiatives, Microsoft will work with selected nonprofits through grants, technology investments and partnerships that combine the company’s AI and data science know-how with these groups’ core expertise.

In conclusion, we are living in an extraordinary period of history. For the first time ever, we have real solutions to tackle some of the world’s biggest problems. It’s time to make AI work for humanity and save the planet.