Tools and Weapons: The Promise and the Peril of the Digital Age

A narrative told from the cockpit of one of the world’s largest tech companies as it finds itself in the middle of the thorniest issues of our time. Published in the U.S. and Canada by Penguin Press, and an instant New York Times Best Seller. 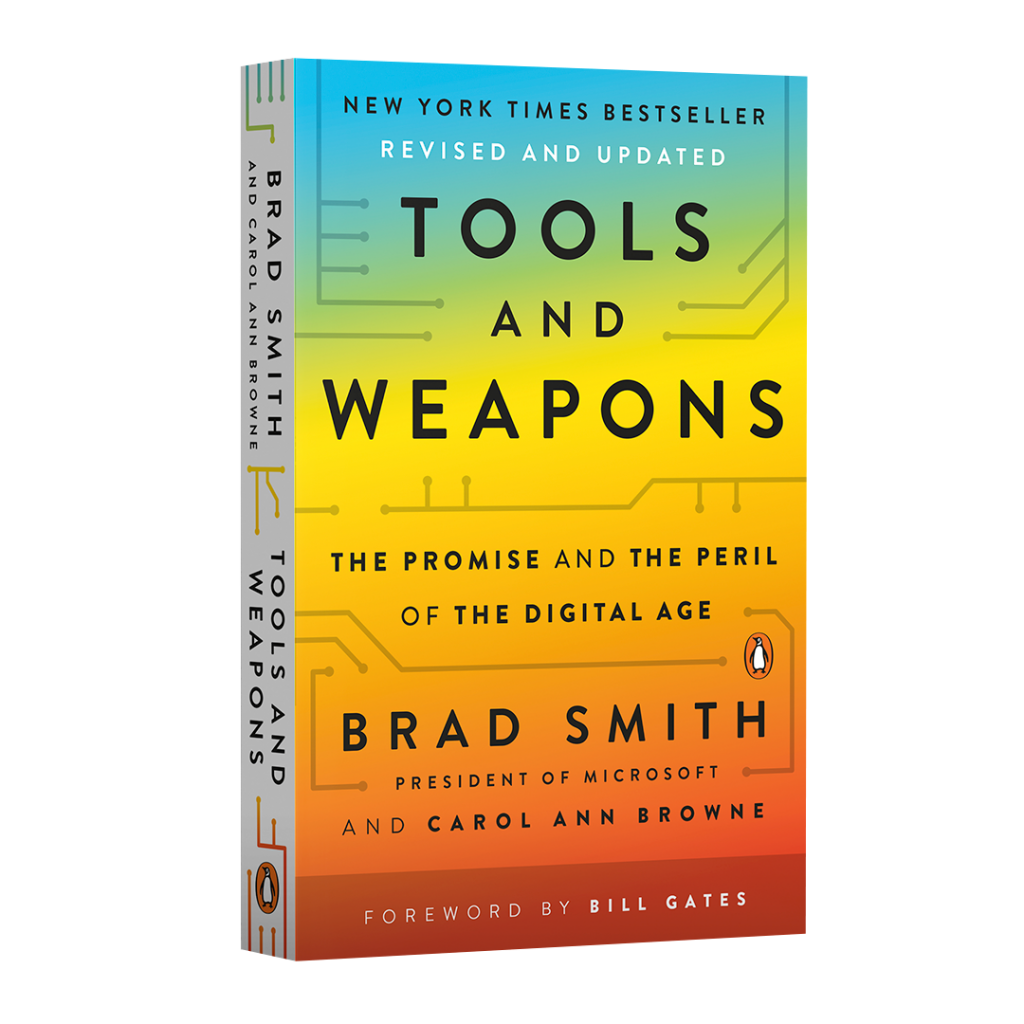 Microsoft President Brad Smith operates by a simple core belief: when your technology changes the world, you bear a responsibility to help address the world you have helped create.

While today’s technologies offer unprecedented platforms for progress and connect people across the globe like never before, they have also unleashed many challenging issues of our time, from cyber warfare to the spread of misinformation on social media to the moral conundrums of AI. Information technology has become both a powerful tool and a formidable weapon, creating a set of challenges with no pre-existing playbook.

In Tools and Weapons, Smith and Browne present an insightful and actionable plan to confront these challenges. They argue that as technology advances, the work to oversee it—led by both the tech industry and governments—needs to speed up as well.

First released in 2019, the book opens the curtain remarkably wide on many of Microsoft’s own recent crucial decision points, as the company strives to protect the hopes technology offers against the very real threats it also presents. In 2021, new material to the paperback edition updates the book’s original argument with a fresh look at the technological issues as they exist in 2021, including cybersecurity, digital sovereignty and tech in a pandemic. The tech world has undoubtedly changed since 2019, but Smith’s impassioned advocacy for collaboration and government intervention is even more timely in 2021, given the issues facing the world today.

How Top-Valued Microsoft Has Avoided the Big Tech Backlash

Brad Smith - "Tools and Weapons" in the Digital Age

Brad Smith Pulls Back the Curtain on Microsoft

We’re Not Ready for a Massive Digital Terror Attack

What people are saying

Praise for Tools and Weapons

Taming Big Tech will not be easy, but this book . . . shows where to start.

Brad Smith has emerged as a vocal and principled thought leader addressing how technology can either help uphold or undermine human rights. As digital technology continues to proliferate, these issues will only grow in importance and command more of the world’s attention.

This is a colorful and insightful insiders’ view of how technology is both empowering us and threatening us. From privacy to cyberattacks, this timely book is a useful guide for how to navigate the digital future.

— Walter Isaacson, bestselling author of The Innovators and Steve Jobs As Microsoft’s president, Brad leads a team of more than 1,400 business, legal and corporate affairs professionals working in 56 countries. He plays a key role in spearheading the company’s work on critical issues involving the intersection of technology and society, including cybersecurity, privacy, artificial intelligence, human rights, immigration, philanthropy and environmental sustainability. The Australian Financial Review has described Smith as “one of the technology industry’s most respected figures,” and The New York Times has called him “a de facto ambassador for the technology industry at large.”