Language is the key to success 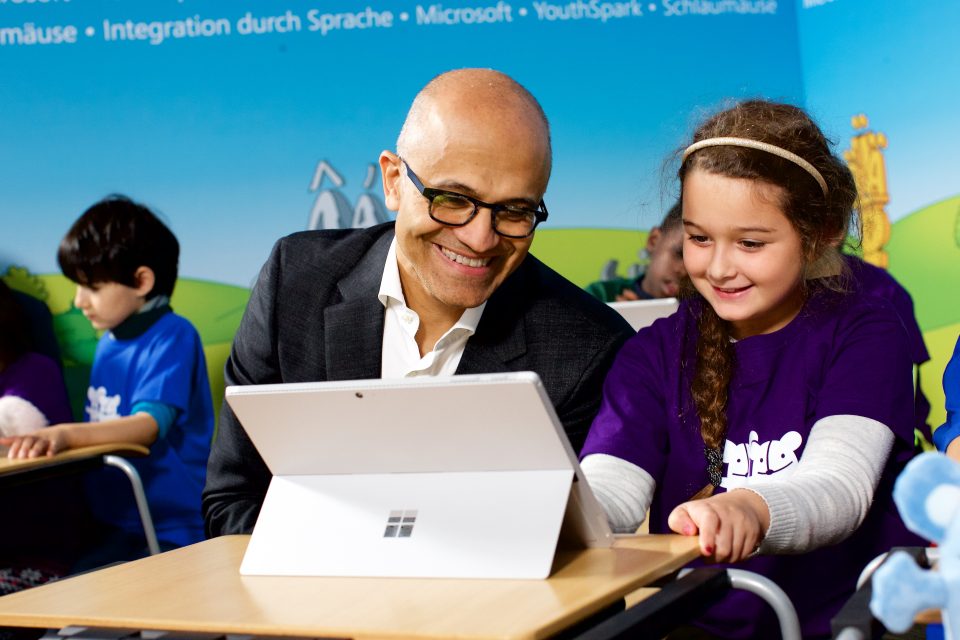 Language is an important key to successful integration. In Germany there are currently hundreds of thousands of refugees, adults and children, faced with a need to learn German. This week in Berlin, Microsoft unveiled the new version of the Schlaumäuse language learning software that has been specifically developed for refugee children. The award-winning application is also currently available in Arabic, English, and French.

With the free Schlaumäuse app, children can playfully discover the German language without any previous knowledge and begin practicing their language skills independently. The new version of this app was shown for the first time on Wednesday, October 5, 2016 in a meeting between Microsoft CEO Satya Nadella and the children of a Berlin primary school.

“Language is an essential factor to gain a foothold in a foreign country. With the Schlaumäuse initiative we want to help the many thousands of children who are fleeing war or persecution learn German and find their way in society and later in the workplace. The program shows how technology can be used to tackle societal challenges and to make an important contribution to integration,” explains Sabine Bendiek, chairman of the board, Microsoft Germany.

Working with teachers and educators to help refugee children

With the new Schlaumäuse app specifically tailored to the needs of refugee children, Microsoft is supporting teachers and educators in their daily work. The language learning program will be rolled out across Germany in cooperation with schools, kindergartens, associations and voluntary organizations in the field of refugee assistance. This week, Microsoft handed over the first of a total of 500 starter packages to the newly established House of Resources Berlin, an initiative sponsored by the Federal Office for Migration and Refugees (BAMF), which provides resources for various relief organizations. “The willingness of people in Germany to get involved with refugees is still very high. But to achieve more, many initiatives lack technological possibilities. That’s where a commitment like Microsoft’s comes in” said Ana-Maria Stuth, chairman of the Academy of volunteerism Germany and head of the House of Resources, who accepted the first tablet equipped with the new Schlaumäuse software in Berlin.

Since 2003, Microsoft has been helping with the initiative “Schlaumäuse – Children Discovering Language” to reduce language deficits and enable as many children in Germany as possible to start school successfully. At the heart of the initiative is the language learning software for children aged between five and seven years old. Today, more than 12,000 day-care centers and schools are using the award-winning software.