Maybe the most defining test of wills in football is a drill in which one player lines up a few feet away from another player and they crash into each other like rutting rams.

Imagine being a self-conscious 11-year-old, absorbing this ritual for the first time—the thwack, thwack, thwacking of helmets and shoulder pads triggering flinches and regrets. The drill always occurs in close quarters, with the remaining players and coaches massed around the dueling parties, heightening the urgency and tension. Mix in the audibly elevated demands of a former US Marine turned youth football coach.

The combination overloaded the circuits of Phillip Hale when he tried out for the prestigious North Dallas Cowboys select football team on a dark and rainy day.

“That changed the trajectory of where I was going,” Phillip says of that failed fifth-grade tryout, “from the mindset of how I would approach challenges, how I would approach situations of high pressure and high expectations from others, and how to cope when things don’t go your way.” For Phillip, that first meaningful failure was another interlocking piece in his developing approach to life. He’s a puzzle solver and has been since he learned to walk.

And he’s continued to walk along a path set by his parents, Pansy and Phillip Sr. Their foresight landed them 30 minutes north of Dallas in Plano, Texas, a place they hoped would give their two yet-unborn sons the best possible launching pad for success.

It’s the path that landed Phillip at Microsoft, in Redmond, Washington, where he’s pushing a heady project called Zero Waste that has promise for impacting a nagging environmental issue.

The clock is ticking on that nagging issue—climate change—by the way.

On three of the four large white boards in his office at Microsoft, Phillip has scrawled, “We have 12 years to limit climate catastrophe.” This was a projection last fall by the United Nation’s climate body, the UN Intergovernmental Panel on Climate Change, for the time remaining to limit global warming to a moderate level—a rise of 2.7 degrees Fahrenheit.

It’s a good thing that Phillip tends to arrive early to everything. He started walking at nine months old and was potty trained by about a year old. He was trying to help care for his younger brother, Chris, three months after that.

Phillip Sr. had a routine of heading into his den after work, turning on his stereo, and listening to smooth jazz or a soul artist such as Luther Vandross or Aretha Franklin. One day, his newly ambulatory son wobbled over to the stereo, flipped all the appropriate switches, and got the music playing. Phillip looked back at his father as if to say, “Hey, I know how to do it, man.”

It was the first of many times that his son demonstrated an uncanny ability, Phillip Sr. says, to quickly learn how to do something by watching someone else do it first.

On his first day at Microsoft, Phillip was taken to lunch by his manager. Bussing his table after the meal, he approached three bins labeled compost, recycle, and trash. He’d never been exposed to compost, much less this kind of container array for waste.

Phillip: “This is just for food? I’m going to need a second.”

Manager: “No worries, everyone has a difficult time sorting their waste.”

This got some sprockets spinning in Phillip’s head.

Phillip also began seeing signs for Microsoft’s 2018 Hackathon, held in July. The company-wide event encourages employees to work on new ideas they have to change the world. Phillip was one of more than 23,500 global participants that year. Phillip had an idea for an artificial intelligence solution to help people sort their waste. The project uses a camera to recognize waste items and cue the bearer, likely with an LED light, as to which bin each piece belongs. Others who have attacked the problem have typically focused on automating the process. But it was important to Phillip to include an educational aspect—in essence, teaching a machine to teach humans how to sort waste.

Two Rubik’s Cubes sit on Phillip’s desk at Microsoft. One is the traditional shape, and the other is shaped kind of like the Death Star in “Star Wars.” A blueprint of the first one—the original cube—hangs on his wall. He has solved the rotating brain teasers so many times since middle school that they now offer a kind of automated mindlessness.

He says he uses that state to unleash his creativity, something experts say otherwise cannot be summoned on demand.

“It’s a way of broadening the current range of sense experience,” he says. “Specifically, for me, it activates other creative ideas when I’m stuck on a challenge. “

The first real puzzle Phillip tackled, so to speak, was his inability to earn a way onto the North Dallas Cowboys select football team in fifth grade.

“Getting rejected took an interesting toll on me,” he says.

Plano, like the rest of Texas, had heightened expectations around football.

Not surprisingly, when Phillip decided to toughen up and try out again the following year, Phillip Sr. bought him exercise equipment. His son also stepped outside the box and used some unorthodox strategies for cracking the Cowboys roster. He studied and journaled about the NFL players that he wanted to emulate. He used Madden NFL, an iconic video game, to help him visualize offensive and defensive plays.

The next year, Phillip made the team, engineering a sports redemption story in the tradition of NBA great Michael Jordan, who famously did not make the varsity basketball team during his freshman season at Laney High in Wilmington, North Carolina.

Phillip may not have been Jordan-like, but he earned a starting position during his first season with the Cowboys. He was named the team’s most improved player that year. He later made two all-district teams and helped Plano Senior High School to two semifinal berths in the highest designation, 5A, in Texas high school football. He played linebacker there, as well as collegiately at Coe College in Cedar Rapids, Iowa, but never really looked the part.

At Coe College, Phillip was listed at 5 feet 8 inches and 175 pounds—a size more prevalent at defensive back or one of the skill positions on offense. Moreover, he’s a self-professed nerd who belonged to the chess club at Plano Senior High School and wore braces at Coe College, where he studied accounting, finance, and computer science. Phillip is even slimmer today because he’s training to compete in a long-distance running relay between the Canadian border and Langley, Washington.

“If you would look at him, he probably wouldn’t pass the eye test, but he played big,” says Tyler Staker, who recruited Phillip to Coe College, where he is now the head football coach. “He was tough. He was hard-nosed, man. Don’t let his size fool you.”

Football became a setting in which Phillip developed early expertise at solving puzzles. He decided to play Division III football, a level that doesn’t offer athletic scholarships. Coe College offered him enough academic- and aid-based support that he didn’t have to take out loans, which he thought might hamper him years down the line.

Phillip didn’t blink at moving to Cedar Rapids, which at the time was nearly 90 percent white. He’d grown up amid similar demographics in Plano. He was a first-string linebacker during his junior season at Coe College, which was ranked number 10 in the nation that year, but he skipped his senior season to accept a job at a major financial institution in Iowa.

The risk from head trauma was another reason to walk away from football. Phillip figured he’d taken enough knocks to his noggin.

“I wasn’t going to the NFL,” he offers, “so I needed my brain to make my money.”

Besides, Phillip’s athletic pinnacle clearly was playing Friday nights under the lights in Texas before sellout crowds ranging from 10,000 to 15,000 fanatics. He played with running back Rex Burkhead, who earned a Super Bowl ring with the New England Patriots.

Late in the second game, Phillip sniffed out a big third-down play coming his way. He chopped the larger lineman in front of him and, from the heap, reached out and toppled the ball carrier by his ankles. Though Plano Senior High School would lose in the last seconds of the game, the tackle was a big play at the time.

“It was just an unbelievable tackle. It could have been bad if the guy had gotten around the edge” said Jaydon McCullough, the head football coach during Phillip’s senior year. “There are some people who just refuse to be denied.”

It was a signature moment for Phillip, putting on display his ability to diagnose a situation by visualizing its components and resolving it with familiar tools—preparation, vision, drive, discipline, and commitment. It’s this flair for mastering puzzles that continues to serve him in a world where problems are becoming increasingly daunting and complex.

“With Zero Waste, I wanted to try to solve one of the world’s many sustainability challenges in a cool way,” Phillip says. “Primarily to inspire others to solve similar challenges, because sometimes we all need to be reminded that we can make magic and impact those around us with the resources we have today.” 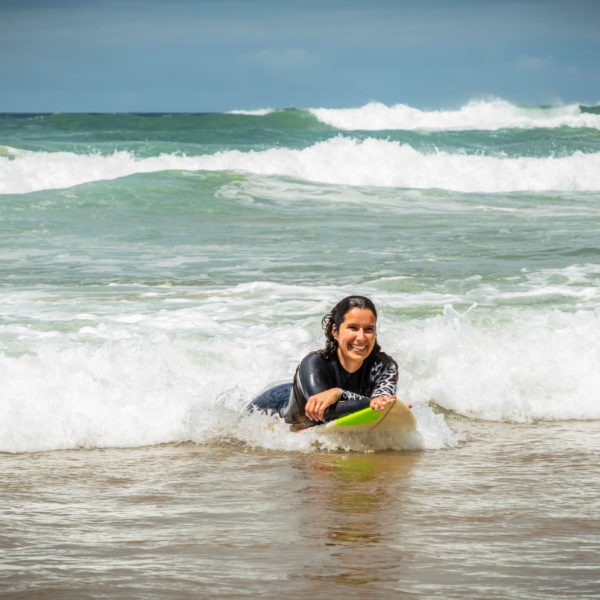 Rita Picarra watched her parents dedicate their life’s work to making sure everyone felt supported, included, and seen—a legacy that she carries forward with responsibility and pride.
Learn more