It’s approaching 10:00 PM on a Tuesday. The house is hushed, and the family is sleeping. All except for the mom.

Brittany Valdes sits in her bed, laptop open, face lit up by the screen. She’s catching up on emails for her side business, a nonprofit organization called The Mom Economy that supports moms while they navigate their careers before, during, and after having children.

She’s heard that working from bed can affect her sleep—but she does it anyway.

An email comes in from a new mother who’s feeling overwhelmed and discouraged after her first week back at work. She cried during a meeting and missed her baby’s rolling over for the first time. Brittany chokes up, remembering those feelings all too well.

“It’s okay,” she types, nodding her head with confidence. “You are doing great! I cried too.” She encourages the new mother and then connects her to one of The Mom Economy members, who started a support group for this very situation.

As she closes her laptop, Brittany’s mind flashes back five years ago to when she discovered that she was pregnant. “That’s it,” she thought at the time. “My career is over.”

She believed that if she wanted to raise a family, she couldn’t be a working mom.

Brittany has always been driven by her career, she explains. During college in West Palm Beach, she ran multiple student and community activities. Then she moved to Chicago and worked in marketing and events at a publishing company and a tourism group. By age 25, her professional achievements were mounting, fueling her growing ambition.

“I was working 60-hour weeks in a big city, and it never felt like work,” she says, laughing knowingly at her younger self. “I thought I was invincible.”

And then, she was contacted by a recruiter. Did she want to lead local community programs for a new Microsoft retail store in Miami? It was the career move she’d been waiting for.

Three weeks later, Brittany received the job offer, but then her life took a twist.

She found out that she was pregnant—and was immediately overcome with doubt and ambiguity.

“I thought that if I wanted to raise a family, I couldn’t be a working mom,” she says, her cheery voice turning suddenly serious.

The decision felt especially fraught for her, given the culture in which she was raised.

“My dad’s side is Cuban, and my mom’s side is Puerto Rican. People from cultures centered on family like mine often particularly struggle with the guilt from wanting both,” she explains.

She was tortured with questions: “Will I get to spend enough time with my kids? Will I be able to devote enough energy to my clients? My baby will only be little for a short time. . . . If I take a break from work, will I be able to pick up where I left off?”

Even though she was uncertain and scared, she had a village around her and decided to make the leap. She took the position as a community development specialist with Microsoft and helped open the first Microsoft retail store in the Miami area.

Over time, through trial and error and many of what she calls “non-Instagrammable moments,” as well as with ample support from family, friends, and coworkers, Brittany learned to redefine success on her own terms.

Once she found a rhythm, other new moms began to reach out for advice. What started as DMs and coffee dates soon became the inspiration for The Mom Economy.

“The Mom Economy was a dream that I had. It woke me up in the middle of the night, and I feel like I’ve been awake ever since.”

Working full time, mothering full time, and running her side job has raised a lot of questions for her about how she does it all.

Her eyes are smiling but somber—a mother’s face just before a teachable moment with her child. Her answer: “I don’t. It’s just not possible.” 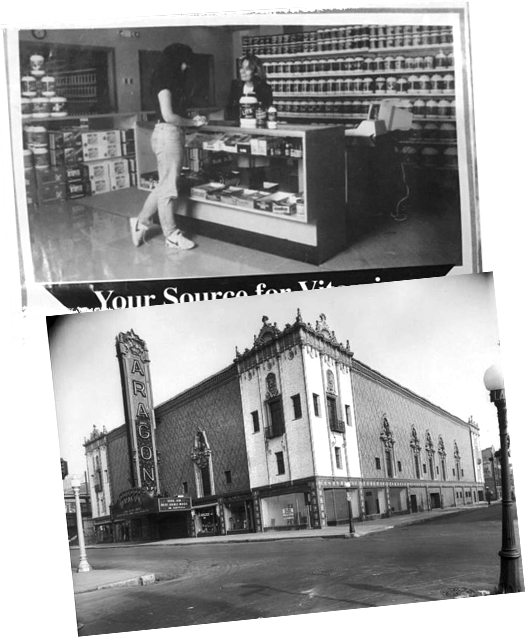 Helping other moms was one part of Brittany’s desire to start a side project. Entrepreneurship, as we call it now, or the side hustle, as her grandfather calls it, runs in the family.

Brittany’s abuelito, Wilfredo, fled Cuba in 1945 and moved to Chicago with his new wife, Delia. In addition to working a full-time job, Willie hosted dances for the Latin community on the weekends at a theater he rented—and eventually bought—named the Aragon. He kept his side hustle a secret from his full-time work for nearly seven years; that’s just how it was done then.

And it wasn’t just her grandfather who had this entrepreneurial spirit. His son, Brittany’s dad, Willy Jr., started his own vitamin shop in the early 2000s and later owned a financial planning business.

“I worked at the shop,” Brittany remembers. “My brother worked there. After school, we were packing bottles, selling. I never even thought about it as something extra. It was just part of our DNA as a family unit.”

While she credits her entrepreneurial spirit to her grandfather and father, she also sees the women—her abuelita, Delia, and her mom, Irasema—working tirelessly to empower their husband’s careers and businesses.

Brittany explains that in her culture and family, there can be covert (and sometimes overt) expectations placed on women to prioritize home and family life. But she wanted something outside of the home, too. She wanted both.

“I wanted to shift the perspective and take all the beautiful things my mother taught me about prioritizing my children to the next level with my kids,” she says. “I want to teach them to really push themselves and go for their dreams.”

“And I think that’s what we need to do at every generation, right? If we do exactly what our parents and our grandparents teach us, we’re not leveling up. We’re not changing. We’re not evolving. We’re not growing.”

Six years after she accepted the job at Microsoft—and now with two boys—Brittany noticed that she wasn’t alone in her struggle to be a working mom. So she started The Mom Economy.

The Mom Economy has several initiatives, but this year, her favorite program was the Mother’s Mercado—a weekend that brought together mother-owned businesses that started as side projects. It was like a boot camp for mom entrepreneurs to learn how to scale their businesses, and one person won a pop-up retail space in New York City.

“I felt like this was a really great demographic because a lot of moms are super creative and started these things as a side hustle, and now it’s their full-time job,” she says. It was inspiring to her, and she wanted to get the word out.

As president of The Mom Economy, Brittany answers emails, connects moms to resources, and focuses the big picture strategy for the nonprofit. The mission is to grow a thriving community of women supporting women. 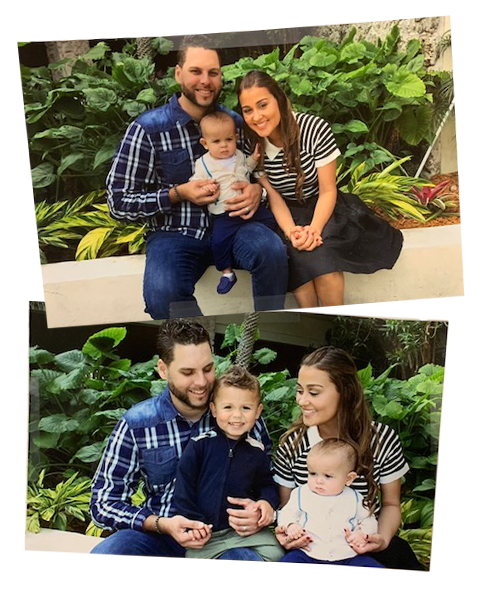 Brittany knows that on the outside, it might seem like she has it all put together. Beyond The Mom Economy, she’s excelled in her career at Microsoft and was named Store Associate of the Year before moving to her current role as the southeast community engagement manager. While she acknowledges that she has an amazing life, she’s been through the fire—and has come out the other side.

Her father had a near-fatal heart attack right when Brittany went back to work after her second pregnancy, during which she was also struggling with post-partum depression and working on her masters degree in Business Administration. She thought the stress was going to end her.

“People only see the glamorous side, right? They don’t see all the hurdles,” she says, pausing with sadness.

“I get emotional speaking about it because, when you’re an entrepreneur, when you’re a working mom, there’s sacrifice. There are things that people don’t see. No one wants to share those things on their Instagram highlight, but it’s part of who we are. We have to find joy in those seasons, too.”

Through struggle and support, Brittany crafted a lifestyle that could sustain both family and work and side projects: a worldview that honors letting go of perfection, staying present in the moment, and investing in things that last.

“It’s not about doing everything in your life perfectly; it’s not possible. It’s about being present for the moment you are in.”

“We really need to push the boundaries on what work-life balance means, because I don’t think there should be a balance. I think it should be a meshed lifestyle,” she says. “If not, no one’s going to be happy because you’re going to always feel like you’re compartmentalizing everything.”

“I’m not perfect, but when my kids look at me, they’re looking at a mom who’s giving them opportunity to see what their life could be.” 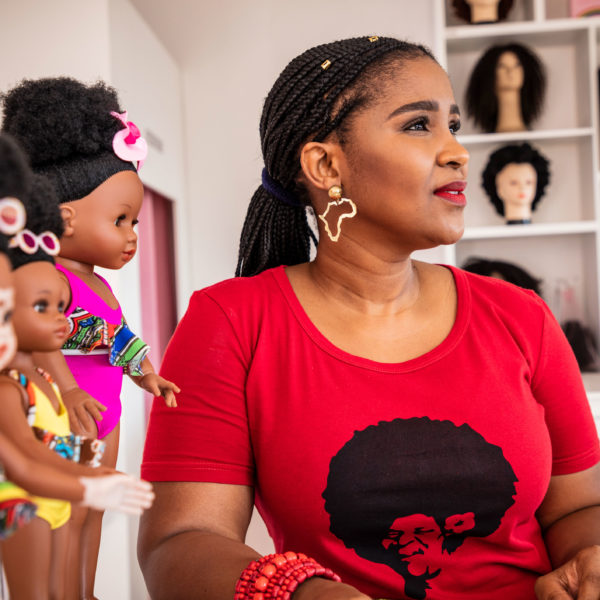 Johannesburg doll maker Khulile Vilakazi-Ofosu takes on the lack of representation in children’s toys by creating dolls that reflect, affirm, and engender pride in being African.
Learn more