REDMOND, Wash., Sept. 24, 2002 — Microsoft Corp. today announced it has purchased U.K.-based Rare Ltd., one of the world’s leading video game developers, further demonstrating Microsoft’s commitment to providing the most innovative interactive experiences available on its Xbox (TM) video game system. Rare has been the mastermind behind some of the most popular video games in history, including such global multimillion sellers as
“GoldenEye 007,” “Perfect Dark,” “Banjo-Kazooie”
and
“Donkey Kong 64.”
Under terms of the $375 million cash transaction, Rare will today begin creating exclusive console gaming blockbusters for Xbox. 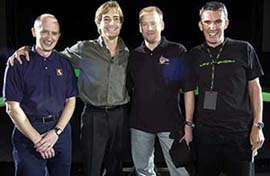 In a statement made from Seville, Spain, where the announcement was made to both a live and worldwide webcast audience during the company’s annual X02 event, Chris Stamper, chairman and technical director of Rare, said,
“Our mission at Rare has always been to make the industry’s best games for the widest possible audience. Teaming with Microsoft gives us the best opportunity to accomplish this goal. Microsoft’s dedication and commitment to game creators, research and development, and to gaming innovation made them the obvious partner to take Rare into the future.”

“We’ve always insisted on pushing the envelope when it comes to creativity,”
added Tim Stamper, co-founder and creative director of Rare.
“And now we get the chance to create for Xbox.”

Rare co-founders Chris and Tim Stamper and their talented team of game developers and designers will continue to work out of Rare in Warwickshire, England. Rare was founded in 1985 as a partnership between the Stamper brothers and Joel Hochberg, now Rare president.

“This partnership significantly broadens our already outstanding portfolio of games that will be available for Xbox. And it also broadens our reach internationally as gamers around the world have demonstrated their fanaticism for what Rare consistently produces,”
said Robbie Bach, Chief Xbox Officer at Microsoft.

“The last time I was this excited was the first time I picked up a controller and played a game from Rare,”
said Ed Fries, vice president of Xbox Game Content at Microsoft.
“As a gamer, you could hardly wait until Rare’s next title was announced. You didn’t know what genre it would be, but it didn’t matter because you knew you were going to love it.”

Rare grabbed the attention of the video game world in 1994 with its creation of
“Donkey Kong Country.”
Selling more than 8 million copies,
“DKC”
went on to become the biggest- selling 16-bit title in history.

Rare became one of the premiere developers in the world, with sales averaging 1.4 million units per title and nearly 90 million games sold since the company was founded. Five of the top 20 all-time-best-selling N64 titles were developed by Rare, including
“GoldenEye 007,”
the second-best-selling game in North America, with worldwide sales topping 8 million.

With today’s announcement, Rare becomes the latest member of a star-studded lineup at Microsoft Game Studios, joining such prestigious worldwide developers as Bungie Studios, the masterminds behind the smash hit
“Halo (TM),”
named Game of the Year by Electronic Gaming Monthly. Rare’s first creation for Xbox,
“Kameo,”
is expected to reach store shelves next spring. Also under development is the highly anticipated sequel to
“Perfect Dark.”
The company is expecting to develop at least five games over the next two years in a variety of genres, including racing, shooters and platformers.

Microsoft Game Studios is a leading worldwide publisher and developer of games for the PC, Xbox video game system and online platforms. Comprising a network of top developers, Microsoft Game Studios is committed to creating innovative and diverse game portfolios for the PC ( http://www.microsoft.com/games/ ), including such franchises as
“Age of Empires® ,” “Flight Simulator”
and
“Zoo Tycoon (TM)”
; Xbox ( http://www.xbox.com/ ), including such franchises as
“Halo,” “Project Gotham Racing (TM)”
and
“NFL Fever”
; and Zone.com ( http://zone.msn.com/ ), the official games channel for the MSN®
network of Internet services and home to such hits as
“Bejeweled”
and
“OutSmart (TM).”

Xbox is Microsoft’s future-generation video game system that delivers the most powerful game experiences ever. Xbox empowers game artists by giving them the technology to fulfill their creative visions as never before, creating games that blur the lines between fantasy and reality. Xbox is now available in North America, Japan, Europe and Australia.

For more information on this Xbox announcement:

Note to editors: If you are interested in viewing additional information on Microsoft, please visit the Microsoft®
Web page at http://www.microsoft.com/presspass/ on Microsoft’s corporate information pages. Web links, telephone numbers and titles were correct at time of publication, but may since have changed. For additional assistance, journalists and analysts may contact Microsoft’s Rapid Response Team or other appropriate contacts listed at http://www.microsoft.com/presspass/contactpr.asp .