REDMOND, Wash., April 18, 2005 — Microsoft Corp. today kicked off a new global awareness campaign designed to showcase how people can explore, enhance and pursue their passions with Windows® XP and related technology — whether that passion is music, movies, cooking or the cosmos. The international effort called “Start Something” is one of the largest and longest marketing campaigns in the Windows brand history. Using fresh, imaginative advertising, retail executions, online activities and more, the 15-month campaign celebrates the countless possibilities for Windows to bring what people are passionate about to life using the hundreds of thousands of software applications and devices that work with Microsoft® Windows XP. 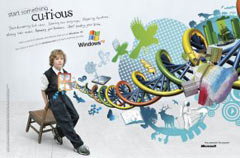 One of the new “Start Something” ads that is part of the new global awareness campaign for Microsoft Windows XP.

“As we enter the third decade of Windows, the Start Something campaign celebrates how people can follow their dreams and pursue what they are passionate about — from creating an in-home music studio to starting a new business or becoming the family photographer,” said Will Poole, senior vice president of Windows Client at Microsoft. “Windows has evolved to integrate a wide range of applications, services and hardware in a way that has become familiar and expected as part of everyday life for millions of people around the world. We hope that people will be inspired to experience the endless possibilities available in the Windows ecosystem.”

The Start Something campaign uses imaginative illustrations and animation to demonstrate how Windows opens a pathway to a kaleidoscope of activities that people are enthusiastic about pursuing. With language such as “Start something curious,” “Start discovering lost cities” and “Start feeding your brain,” the campaign depicts a window over people’s hearts to symbolize all of the things they are passionate about that is made possible with Windows . All advertisements will point consumers to http://www.windows.com, a Web site that features devices from key partners and software applications for each of the featured passions reflected in the advertising.

The advertisements for the 15-month campaign will run in a total of 11 countries, launching on April 18 in the United States and following in Australia, Canada, France, Germany, India, Italy, Japan, Korea, Netherlands and the United Kingdom. The campaign will showcase 13 themes spanning education, science, music, sports, family and life management, gaming, photography, cooking, travel, entertainment, work, productivity, and entrepreneurship. The campaign will be included in a media mix of national television, print, online and out-of-home advertising vehicles. A total of 51 television ads, 39 print ads and 250 online ads will be featured globally.

The campaign reflects a major effort by Microsoft and its ad agencies. McCann-Erickson and Microsoft worked closely together to identify what people are passionate about and mapped those results to the campaign’s creative execution. McCann-Erickson collaborated with other McCann Worldgroup agencies, including MRM Partners in San Francisco and Momentum Worldwide in San Francisco and St. Louis.