More than two years ago, the NBA set out to transform the way fans engage with the league and its teams and players. Their vision was to offer a truly personalized experience – where each fan’s interests would drive the content they receive.

On Tuesday, the NBA announced that their vision had become a reality earlier this month with the reimagined NBA App, powered by a new integrated digital platform built in partnership with Microsoft, the league’s cloud and AI partner. “What makes this app unique in the sports world is that it’s both a deeply personalized experience and an all-in-one destination,” says Chris Benyarko, NBA executive vice president of direct to consumer. “We think this platform makes it easy to be an NBA fan. It allows people to immerse themselves in what’s happening with the league. And there is much more to come.”

A personalized app with a global footprint

Delivering a personalized experience is a tall order considering the league has a social media community of more than 2.1 billion people globally across league, team and player accounts. There are fans on every continent in every time zone speaking every language, and each person might prefer a particular team, player or aspect of the game.

“NBA fans are global, they’re dynamic, they’re diverse,” says Benyarko. “It’s vital to establish a direct relationship with our fans, so we’re in a position to make this app a resource that speaks to all things NBA and all things basketball.”

The NBA vision for the next-gen fan experience was crystal clear but building it would be complex. Enter the Microsoft Cloud. According to Ken DeGennaro, senior vice president of media operations and technology for the NBA, Microsoft stood out with the ability to provide a complete platform to aggregate data and then act on it using advanced AI and machine learning. Microsoft’s own engineers and vast network of partners also meant the NBA could tap into the resources and expertise needed to bring its vision to life. “We’re a basketball league,” says DeGennaro. “We don’t need to reinvent what companies in the tech and broadcast industry already do so well. We’re focused on creating a differentiated basketball experience [for our fans]. Microsoft offered the Azure platform, the capabilities, and partners with deep expertise to help us put it all together.”

A broadcast platform for now and the future

Like all personalized digital experiences, the new NBA App is driven by data, but those deep data services depend on the fundamentals of handling the content. Just broadcasting a single game takes massive effort from many touchpoints, hands and voices. Other content types come at different velocities and levels of creative overhead. Some clips are true craft pieces that are voiced over, reviewed, edited and finalized. Others are served up as they happen.

The ability to scale and handle such a massive flow of content and data across multiple time zones is a difficult challenge. But for the NBA, it’s table stakes.

“The ability of Azure to receive very high-quality feeds is paramount for us as stewards of the game and the fan experience,” says DeGennaro. “Microsoft has a cloud tailor-made and ready to deliver these streaming services. Those fundamentals are things that have been enabled via Azure and its partner network for the NBA to deliver the best experience to fans.”

A massive data challenge and a huge opportunity

A “massive flow of content” is no overstatement. The league wanted to be able to utilize fan insights to personalize their experiences and incorporate data about the game itself and everything that’s happened over decades of NBA play. This includes a treasure trove of live and historical content, statistics, game strategies and a host of other aspects.

“Combining data from the game with insights from fans will allow us to build engaging content and deliver experiences you can’t get anywhere else,” DeGennaro says. “It also allows the system itself to continually learn about basketball and improve over time.” 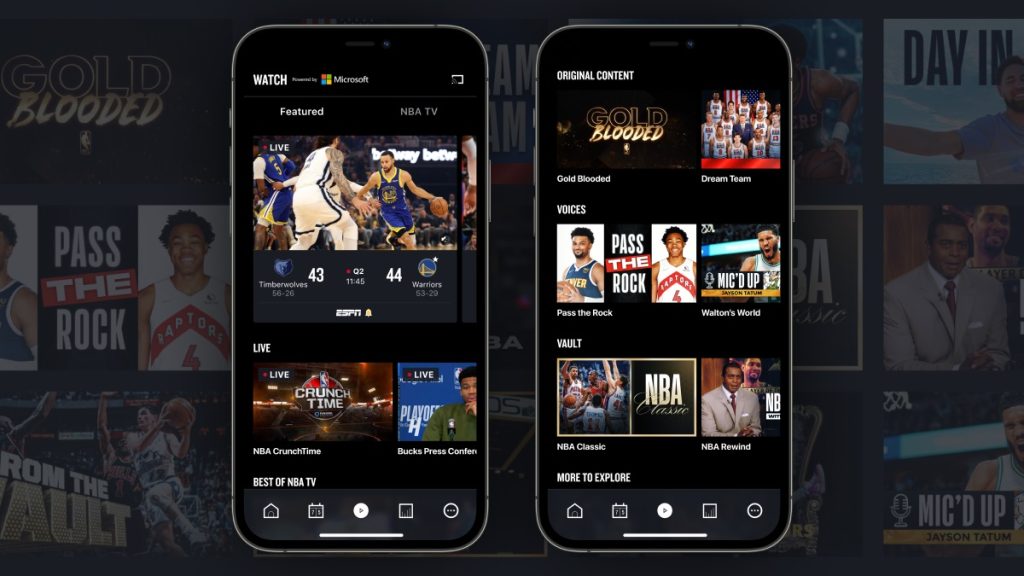 Those fan experiences take several forms, from how people watch the game to surfacing deep statistical insights. Machine learning creates a flywheel that gains momentum to deliver more insight into what fans see, how they interact with the applications and their behaviors and reactions to the content.

Looking to the future, the ability to extend into new capabilities such as augmented reality, virtual reality, and other technologies will ensure the NBA’s official app continues to evolve. These technologies could allow the NBA to tailor live game broadcasts and modify the game experience. For example, giving fans the ability to use different viewing angles, or different commentators, or offering animations of the game in real-time, such as a first-person view of the way LeBron James sees a play breakdown as he brings the ball up the court.

“We like to experiment with everything, and we feel like we have a good foundation to do that,” says DeGennaro. “We’ve always thought of this launch as day zero. Beyond the things that we’re launching now, we have more than a few things in the lab. In order for that to be possible, the underlying technology platform needs to exist, and that is Azure, that’s Microsoft.”

The NBA and Microsoft are committed to wowing fans with a product that truly stretches the boundaries of basketball and technology.

Photos courtesy of the NBA.