On Microsoft’s campus in Redmond, Washington, old buildings have fallen and fresh steel has risen as the land takes shape for new, modern structures across 72 acres. Workers have carved and sculpted bare dirt into faint outlines for 3 million square feet of beautiful workspace and amenities.

But in one corner of the project, construction workers are also doing something else: drilling hundreds of deep wells in a muddy pit that will eventually be covered by grass and trees.

The hidden wells will be the foundation of a large system that heats and cools the new buildings with an untraditional clean energy source: the constant temperature below the earth’s surface. Tunneling 550 feet into the ground — almost the height of the Space Needle in nearby Seattle — the wells will compose one of the largest “geoexchange” fields in the United States to harness the earth’s thermal energy. They will also be a big part of Microsoft’s ambitious goals to help the planet.

“We knew we wanted our new campus to be zero-carbon in its daily operations,” says Katie Ross, global sustainability lead for Microsoft real estate. “So we had to think outside the box on how to provide heating and cooling needs for these buildings. That’s really what drove us to geoexchange technology.” 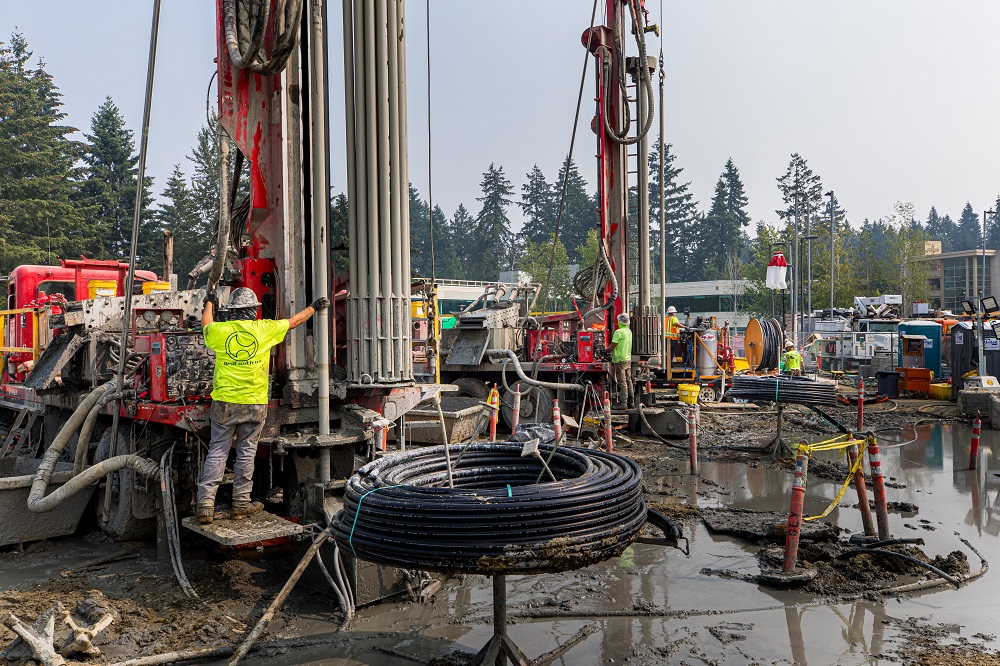 Called the Thermal Energy Center, the centralized and almost entirely carbon-free system wasn’t part of the initial plan for the campus modernization, which is redeveloping a fraction of Microsoft’s 520-acre headquarters over the next few years. The design had originally called for more typical individual utility units, powered by natural gas, for each new building.

But redevelopment of the 34-year-old section of campus presented an opportunity for the company to think creatively about its impact on the environment.

To remove fossil fuels from daily operations, it had to eliminate natural gas from kitchens and heating and cooling systems. Because it was developing many buildings at once, it could centralize heating and cooling functions in one location for efficiency. And thanks to a longtime emphasis on open and green space on campus, it had plenty of land to work with. “What I love about working in sustainability at Microsoft and on this project is that it’s like that improv comedy game ‘Yes, and,’” Ross says.

The process led to the current design for a 2.5-acre field of 875 geowells. More than 220 miles of piping will distribute 300,000 gallons of water as a heat-exchange medium across the wells and the new campus in a closed loop system. The three-story Thermal Energy Center will house enormous chillers, cooling towers, back-up generators, solar panels and 65-foot tanks that can store 280,000 gallons of the water as thermal energy. The entire system will run on renewable electricity except for the generators, which will use a negligible amount of energy and only during emergencies and scheduled maintenance.

“Microsoft has a very powerful commitment in being carbon negative by 2030, and their investment in a central plant that eliminates fossil fuel use in daily operations is really one of the most innovative qualities about this campus project,” says Brian Meinrath, an environmental design consultant at Atelier Ten, the sustainability consultant firm for the campus modernization project. “The plant has also been designed to be particularly water efficient.” He added that the large size of the geofield is unusual. Geoexchange systems take advantage of the temperature difference between sub-ground soil, which remains constant year-round, and that of ambient air, which changes with the seasons. When air is colder than the ground in winter, pumps circulate fluid through looped pipes to transfer ground heat into buildings. When air is warmer than the ground in summer, the process reverses. Used for decades, geoexchange is more common in small projects like houses and on the U.S. East Coast, where extreme seasonal changes like scorching summers and sub-zero winters make the technology more cost-effective. But geoexchange is still much less common than traditional air conditioners and gas- and oil-fueled boilers and furnaces.

In Redmond, the system is expected to reduce energy consumption by more than 50% when compared to a typical utility plant. It will use renewable energy that Microsoft buys from a regional utility for its Redmond-area operations. The system’s wells and tanks will also store water as heat energy for future use, instead of expelling it through the cooling towers. That will reduce water use by 8 million gallons a year or roughly the volume of 12 Olympic pools. The work will play a key role in supporting Microsoft’s sustainability goals for carbon and water. In 2020, the company announced it will be carbon negative by 2030 and by 2050 remove from the environment all the carbon it has emitted directly or by electrical consumption since its founding in 1975. It also announced it will be water positive by 2030, which means it will replenish more water than it uses. The company said it will reduce water use intensity in its operations and replenish water back into basins that need it most.

When the newly redeveloped section of the campus opens, a grassy sports field and a dense canopy of trees will cover the geofield. But the nearby Thermal Energy Center — nicknamed a “machine in the woods”— will feature a see-through porch and façade so people can see and learn about the equipment.

“The building is not only a commitment to sustainability, but an opportunity to show employees and customers how we think about sustainability and how things work,” Ross says.

The project has been an exercise in logistics, with well-drilling expected to last a total of two years, as it navigates around tree roots as part of Microsoft’s dedication to tree and habitat preservation. The plant was also the last building for construction to start on but needs to be the first one finished. Demolition for the campus project began in 2018; the first occupied building is expected to open in 2023.

We knew we wanted our new campus to be zero-carbon in its daily operations, so we had to think outside the box.

For Mike Green, senior project manager for the Thermal Energy Center, the outcome will be worth the effort in building a sustainable future. The campus project is also building cistens for 200,000 gallons of rainwater, diverting 95% of its demolition waste from landfills and reducing embodied carbon in building materials by at least 30%. Embodied carbon is carbon released in the manufacturing, production and transportation of construction materials.

“I’ve been in construction my entire 40-plus-year career and have never done a project that has such a commitment to the environment like the Thermal Energy Center,” says Green, building systems director of OAC, a construction and project management firm.

“To reduce energy and water use and eliminate carbon emissions in daily operations is a statement,” he says. “It’s the way of the future.”