For more than a quarter of a century, violence was nearly constant in Ovejas, Sucre, a small town in the foothills of the Montes de María in northern Colombia. The region was the scene of fierce clashes between armed groups and a mass exodus of its inhabitants. Their cultural richness, music and traditions stopped in time, along with the region’s development.

With the signing of a national peace agreement in 2016, the people began to return along with opportunities: previously impenetrable territories managed to connect again with government and private organizations, and Ovejas came out of isolation.

With Microsoft’s Airband Initiative, which aims to close the digital divide and bring high-speed internet connectivity to communities around the world, connectivity has arrived in this remote region of Colombia and opened a new world for hundreds of children and young people.

“My children tell me they have learned so much from the internet, and that is so important,” said Wilmar Hernández, who shares the courtyard of his house with the San José de Almagra school. He makes a living growing tobacco, and today his children teach him how to handle a cell phone.

“Now one’s children have all the possibilities,” he said.

Thanks to broadband access provided through the Airband initiative and Microsoft’s local broadcasting partner Telecaribe, 650 children from eight schools tucked among the dusty streets and green mountains around Ovejas have been able to experience internet connectivity for the first time. Colombia is one of the Latin American countries that has made the most progress with the Airband Initiative, which has connected more than 180 schools and community centers there.

To get to school, many children and young people living near Ovejas must walk kilometers under the sun and rain on difficult roads. Some children from the indigenous reserves arrive on donkeys’ backs, while others ride on the motorcycle of a neighbor traveling to town.

On a typical day they now arrive punctually to learn on the screens of cell phones that relatives or friends lend them. They read, review video sessions and download curriculum guides with the help of teachers such as Wílmer García, multigrade teacher of the San José de Almagra Educational Institution, headquarters of Escuela Nueva Activa Las Mercedes. In a single classroom of about 40 square meters (430 square feet), García improvises virtual learning guides in which he shares material interactively. His goal is to inspire children and young people to finish school and then take the next step to professional, technical or technological university careers.

Forty minutes from there, at the El Camping Education Center, his colleague Julio Hernández teaches natural science lessons to a handful of children in a classroom that 20 years ago sheltered workers who built the road that connects Ovejas with Sincelejo, the capital of the Sucre Department.

“The internet connection…came when children needed it most, just in time for virtual classes,” said Hernández. “People came from other schools to connect, and it was also very useful for students of technical education programs. Here they had connectivity, a roof and furniture to do their projects and assignments and even to connect to their online classes.”

Research conducted by the Inter-American Institute for Cooperation on Agriculture (IICA), the Inter-American Development Bank (IDB) and Microsoft in 24 countries in Latin America indicates that 77 million people living in rural populations lack connectivity with minimum quality standards. This connectivity gap limits the social, economic and productive potential of the region.

In Colombia, the differences in broadband access between cities and the countryside remain stark, with 71% coverage for urban areas and only 37% for the countryside. Some remote areas are completely cut off from a world that is increasingly digital. According to the study conducted by IICA, Microsoft and the IDB, only 9.4% of households in rural areas have a desktop, laptop or tablet computer, which has hindered access to educational and professional opportunities in these communities.

García, who has been teaching in the region for 21 years, sees technology, but above all connectivity, as essential for young people to succeed today. Colombia is one of the Latin American countries that has made the most progress with Microsoft’s Airband Initiative, which has connected more than 180 schools and community centers there. Photos by Nicolás Congote.

“For decades they were lagging behind in the countryside, dedicated exclusively to agriculture, and did not envision living here. Today this technology is giving them a new vision because they can go to study and, if they want, return to work in their field, but with better tools and knowledge,” he said.

Paula Imitola lives next to the El Camping Education Center, which she first attended when she was five years old. Today, she has a preschooler and fifth grader who study there. In addition to her children’s classes, Imitola found support to finish her studies there — with her computer in hand, she sat outside the school for two, three hours to do her work and take virtual classes.

‘When the internet came, many kids who are in college or high school, as well as parents and the community in general, benefited. Even people who are not part of the community came here to connect, to do errands, to make their resume, to look for a job,” she said.

Microsoft has committed about 10 billion Colombian pesos, roughly 2.5 million USD, to deploy its purposeful connectivity program in Colombia, where it aims to reach 2 million connected people by 2022. In addition to the project in Ovejas, the Airband program is collaborating with partners such as the Alcaraván Foundation (Ecopetrol and Sierra Col), the Lavazza Foundation (with ALO & Partners and Makaia), the National Federation of Coffee Growers and the Luker Foundation.

In addition to its educational component, Airband Colombia has projects in agriculture, health and local empowerment aimed at reactivating the economy and promoting rural development. “There are projects in the coffee, cocoa, livestock and cotton production chains where technology is helping people be more productive, so their costs are lower and they receive more money at the end of the day,” said Germán Otálora, Airband’s director for Latin America. 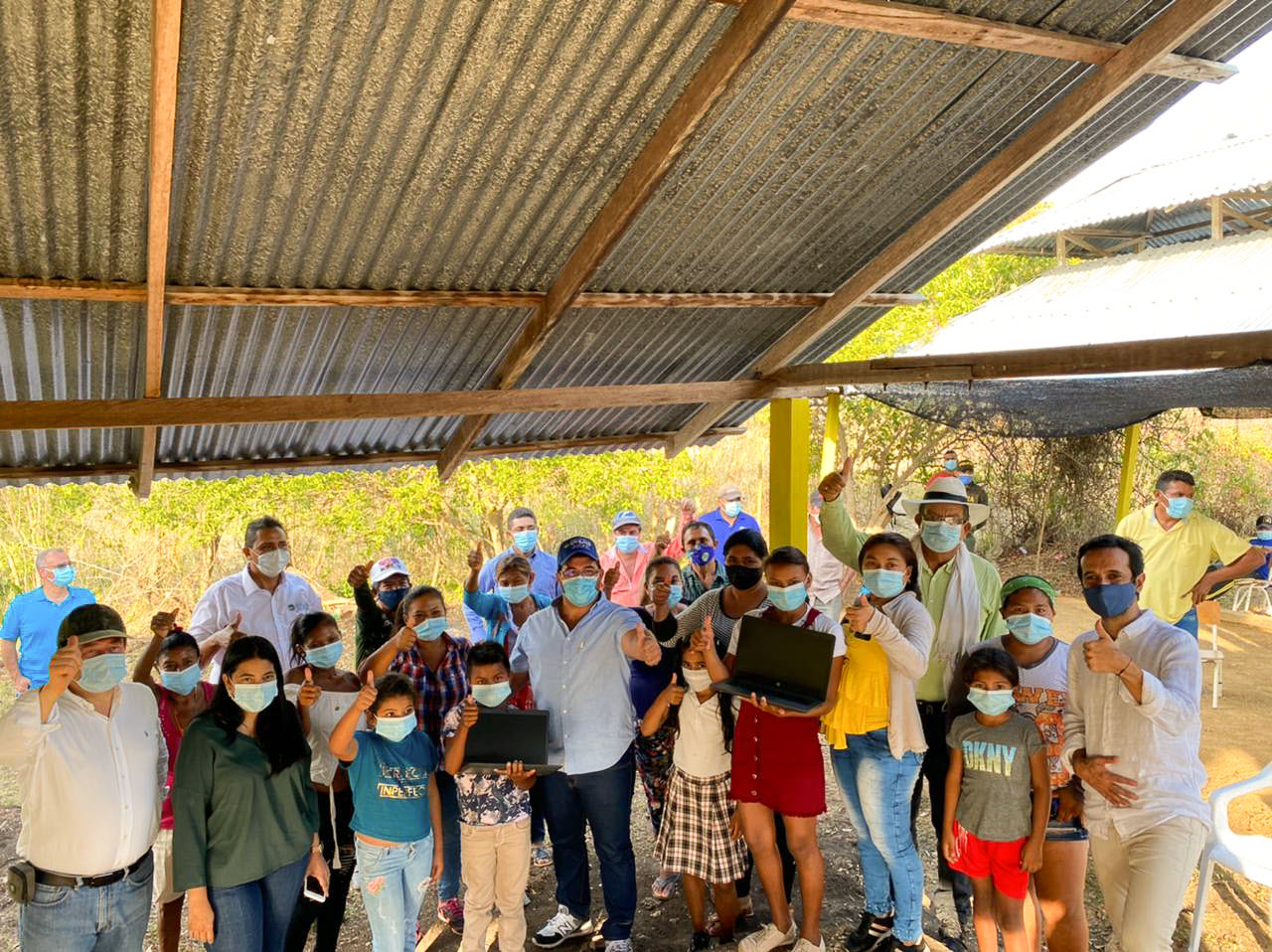 650 children from eight schools tucked among the dusty streets and green mountains around Ovejas have been able to experience internet connectivity for the first time. Photo by Nicolás Congote.

Telemedicine solutions have also enabled people living in remote areas to access essential medical services as well as specialists in dermatological, cardiovascular and respiratory diseases who have improved their quality of life — without having to journey several days to reach a doctor.

“Progress cannot leave anyone behind,” said Otálora. “Technology is only a means, the true end is to generate development, opportunities and well-being.”

Top image: Microsoft’s Airband Initiative has brought internet connectivity for the first time to Ovejas, Sucre, a small town in the foothills of the Montes de Maria in northern Colombia. Photo by Nicolás Congote

This story was written by Sylvie Duchamp and Nicolás Congote and published on June 6, 2022.