Since the COVID-19 pandemic began, certain things have become necessities: face coverings, hand sanitizer, social distancing. For music students around the world, none of those things are needed when they’re joined together to play virtually with other classmates. And often Microsoft Teams is the concert hall of choice.

“When you make music together in orchestras and choirs, you come together,” says Ceyda Cekmeci, choir director for Istanbul’s Music for Peace Foundation, which provides free music education to underprivileged children. “All the individual and social benefits of music, we still get the chance to experience them through technology, even when we have to stay in our homes.”

“When the lockdown came, everything stopped and I knew I had to do something,” says Alphons Joseph, founder of Crossroads School of Music in India, which offers specialized instrument training and vocal music beginning with kindergarten-age children. “We have around 600 students, and if we just left them, they would not only lose interest, but other problems could develop. So, I started searching.”

Celebrating the music
In South London, Gareth Gay has been teaching music for two decades – first in a high school, now as the head of Sutton Music Service, which has been providing virtual lessons to 250 students a week ranging from ages 8 to 18, offering discounted rates for those who receive free school meals or have been in foster care.

“Our aim is to help every young person in London make, be inspired and celebrate the music they love,” he says, adding that all instruction prior to the pandemic was typically in a group setting at a school hall. “If you’d said in February that in a few weeks’ time everything was going to be online, I wouldn’t have believed you. It all happened so quickly.”

Coming to the end of their spring term, Sutton Music was forced to cancel multiple concerts, including their annual show at South London’s largest arts center, Fairfield Halls – an eagerly anticipated event for their students. 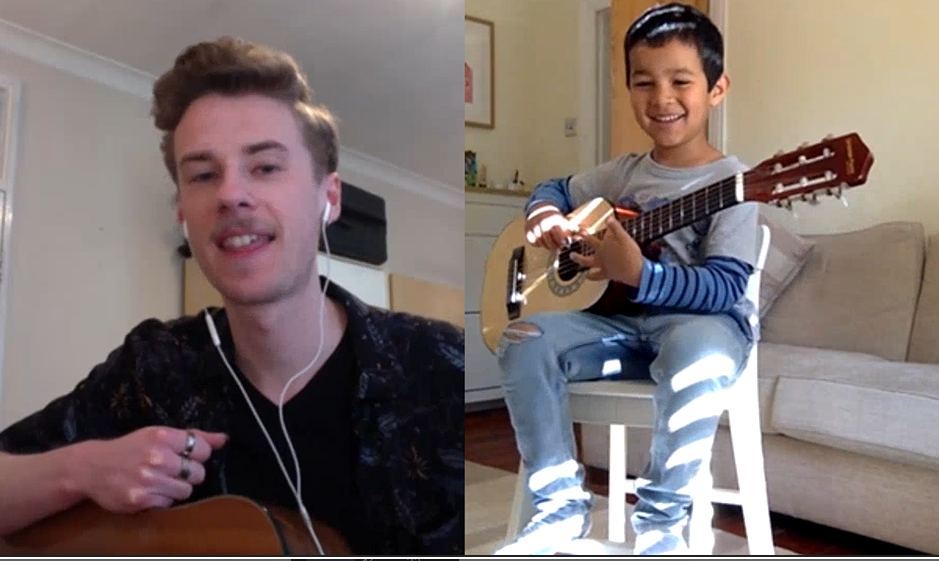 “We knew we had to move online, as quickly as possible; we chose Teams because I was familiar with it and had used it before,” he recalls. “I liked the way we could create accounts for the parents to run things really securely, I knew safeguarding was going to be one of our biggest issues and Teams checked all those boxes.”

Since early in the pandemic, Sutton Music senior staff has been using Teams to arrange meetings and share ideas — while students have been learning on group calls, using the chat window to keep in touch with each other, and using the “raise hand” feature to ask questions of their instructors.

Gay and his team receive invites to all lessons, and all lessons are recorded, which allows them to perform quality control more effectively than ever before. There’s also a Teams library for students to re-watch their own lessons or compare notes on the lessons of others.

When you make music together in orchestras and choirs, you come together.

In an online video this past summer, several Sutton Music students discussed mental health and maintaining their well-being through music during the shutdown.

Between talks of their flutes, pianos and clarinets, the high school-age kids spoke about how different it is creating music when you know a parent could come walking through your bedroom door at any moment; working with a conductor when there’s a lag to the video; and how the lack of in-person competition between players has freed them up to set and conquer their own goals.

“As far as feedback, they say they like being able to stay in contact with their friends and their teachers,” Gay says.

“Some have really enjoyed performing in things like the percussion video we made during an open-mic night, and many parents have emailed to thank us for reminding their kids that their instruments exist and they should be practicing. Continuing rehearsals in any capacity, given the difficulties of the current pandemic, has been appreciated.”

Improvising when needed
More than 7,000 children around Turkey have had their lives touched by Music for Peace, which often leads to scholarships and acceptance at the Music Conservatory of Turkey.

Prior to the COVID-19 outbreak, the students had been practicing around-the-clock to perform at the opening ceremony for the country’s Technology Summit – typically, a high-profile performance with a multimedia stage show. After the pandemic was declared, they proposed creating a virtual choir.

“When you make music together in orchestras and choirs, you come together. But when everything was stopped, we learned we wouldn’t be able to do our regular classes, and concerts were being canceled,” recalls Cekmeci of Music for Peace.

“We found some solutions to keep making music together, and we started to move our music classes online. We also met with Microsoft right before the pandemic outbreak – our initial correspondence was to get involved in the Technology Summit by giving an opening concert, but then we transformed the idea into a virtual one. Ultimately, we used Microsoft Teams to record the freestyle introduction part of this particular piece.”

The resulting video featured students from ages 9 to 25 performing a revered Turkish folk song, and went viral when it was released in April on the 100th anniversary of National Sovereignty and Children’s Day (a holiday that has the country celebrating its children). It also received coverage on a number of national Turkish TV stations.

At a time of crisis, music brings people together. It has so many benefits.

When lockdown began last March, Joseph was sent scrambling for an alternative to in-person instruction. He had recently appeared on a Rahman-centered podcast called “I Love ARR,” hosted by an Australian friend named Chander Ramanathan, who uses Microsoft Teams for the production.

“The COVID-19 situation – boom, it hit everyone,” remembers Ramanathan. “I had a call from Alphons saying ‘Think of some options and let’s get together.’ I said there’s nothing to think about, it’s Microsoft Teams.”

The next day, the two met for a tutorial – and in no time, Joseph was confident enough to determine it was the way forward. They trained the faculty of nearly 40 people, created various channels for vocals, piano and more classes, added students as guest users, employed Microsoft Forms for evaluations and implemented it all – over a single weekend.

“Another great feature is Live Event,” says Joseph, unabashedly thrilled by the possibilities such technology has put at his fingertips.

“Recently I tried a Live Event, and more than 1,000 people attended. I was giving a starter session in music theory. Even for my existing students, I’ve been doing it as a combined session where I do Indian music and Western music. I give that free, so the Crossroads students will have an edge in that musical knowledge. For me, this platform gives me a big office in my hands.” A newfound confidence
All over the world, music teachers are making an impact like never before. Music students are learning to collaborate and hone their skills in ways they never imagined. And music is bringing people together, at a time when that is so very needed.

“We are longing to get back together, because that’s what’s really important,” says Gareth Gay. “But the technology is fascinating; it has given us a massive jolt into the future and shown us the possibilities of how it could be useful going forward.”

“At a time of crisis, music brings people together,” adds Cekmeci. “It has so many benefits.”