Lumen Technologies is having a big year.

The company was born in September 2020, when telecommunications company CenturyLink announced a rebrand to Lumen Technologies and brought to the forefront a focus on furthering human progress through technology. Lumen, headquartered in Monroe, Louisiana, builds on a long networking legacy by providing businesses with an interconnected global fiber network infrastructure, edge cloud capabilities and security, and communication and collaboration solutions.

Then, in a major development less than a year later, Lumen expanded its longstanding relationship with Microsoft by establishing a strategic alliance, which will bring Azure cloud capabilities to the Lumen network of edge locations.

Transform spoke with Paul Savill, senior vice president of Product Portfolio Strategy and Alliances for Lumen Technologies, about the alliance between Lumen and Microsoft, and what it means for the enterprise world.

Transform: What do Microsoft and Lumen each bring to the table for this alliance?

SAVILL: Each Lumen partner brings unique strengths. Microsoft, of course, brings leading software and cloud services technologies. Lumen brings our global networking capability and the deep capillarity of fiber that goes out to enterprise locations and distributed edge node locations, as well as an array of consulting and professional services. This strategic alliance enables Microsoft to extend its technologies and capabilities over the deeply connected Lumen edge platform and extensive network of landing spots.

Transform: What does this mean for businesses?

SAVILL: We’re giving them more technology choices to leverage. In the past, customers could only host workloads and applications out of a centralized cloud or their own private data center, versus on premises. Now they’ve got a third landing spot, Lumen edge compute nodes, which offer a unique performance and cost benefits.

There is no other company right now with Lumen’s reach in edge compute. Lumen already has 45 edge compute nodes up around the U.S. and continues to expand. Using Azure technology, we can extend a version of the Azure cloud to our edge compute nodes so that it is very close to the customer location and the digital interaction.

This offers performance benefits, such as achieving low latency performance for applications even when a business is not physically close to an Azure cloud data center. It creates an additional landing spot that can offer better economic benefits.

This can enable customers to take on-premises workloads and move those to the edge to work within the Azure cloud ecosystem. For many workloads and scenarios, this opens up a new world of opportunities for customers in terms of optimizing their cost structure and performance, and building out next-generation applications.

SAVILL: Enterprises with several physical locations in a market often build out compute infrastructure at each location, with servers placed on site. It can be very costly to keep up with the growing computational power that’s required at each site, and they are often located in expensive areas where companies are paying more for their space and power. Edge compute allows those enterprises to consolidate all of that compute out of one local edge location that they can run at much higher efficiency and lower cost, and then serve those local branches with network connectivity.

For example, companies that have security cameras at several locations in a market can consolidate video analytics using the edge. Instead of having to invest in upgrading video analytics technology at every location and performing it there, it can be consolidated on a local basis at a single edge location. This simplifies the process for the user, reduces the amount of bandwidth needed and is more cost effective.

Transform: What are some of the new initiatives you are working on with Microsoft that will benefit businesses?

SAVILL: We’re building out the Lumen edge platform so that it can be represented and consumed through the Azure marketplace in a highly automated and integrated fashion. We will automate the process so that customers can push those workloads out onto the Lumen edge platform and connect it with high-performance networking from their enterprise premise and back to the main Azure cloud. For the customer, the digital experience will be as if they’ve never left Azure cloud.

Microsoft has made a number of acquisitions around the 5G space, and together we’re building the ability for customers to deploy private 5G networks as part of their cloud solutions, integrated with Azure cloud services and Lumen edge compute services. This is important to enterprise customers that want to be able to control their wireless networks for performance, security or configuration reasons. Microsoft is developing the technologies and Lumen is working on packaging and deploying them over the Lumen edge in order to make it easier for enterprise customers to have this option in their quiver going forward.

We are working together now in three key areas: smart cities, retail and manufacturing. All these verticals are looking to extend their IoT networks to drive more efficiency and autonomy through private networks and edge computing. For example, factories and large corporate campuses where they may have 3,000 employees in an area can give employees their own private network so that they can transmit communications at faster data rates and lower latency.

Transform: How might this alliance affect the Microsoft products and services that businesses use on an everyday basis?

SAVILL: Microsoft has a whole portfolio of software capabilities and services. We are discovering ways we can improve the performance of those services by running them on Lumen edge. Many of us use Microsoft Teams, for example. Would an instance of Teams for an enterprise campus environment perform better when it’s run at the edge, very close to that enterprise campus environment? Could we do new and creative things associated with that in terms of call control and routing, or being able to push new services out more quickly to those enterprises on demand as a result of leveraging this edge compute technology in conjunction with Azure cloud? Managed security services is another area of exploration, because placing security tools close to the point of attack, or near the threat edge, makes them inherently more secure.

Transform: What is exciting about edge computing to you personally?

SAVILL: The new world of opportunities that it opens up. We talk at Lumen about how the world is moving into the early stages of the Fourth Industrial Revolution, characterized by developments such as artificial intelligence, machine learning and the Internet of Things.

When we combine Microsoft’s capabilities in areas such as AI and ML with Lumen’s networking capabilities and its distributed edge compute platform, it opens so many new opportunities to accelerate in the Fourth Industrial Revolution. Enterprises can create new services that people have never dreamed of before and realize competitive advantage. Lumen and Microsoft are at the heart of the Fourth Industrial Revolution, and that really excites me.

Transform: Lumen has been through a lot of change over the past year. What do you see for the company’s future going forward?

Today, digital assets are much more important to enterprise value than they were even five or 10 years ago. Those digital assets take many forms: video, workloads, data, algorithms, AI tools and applications that run businesses.

The collaboration with Microsoft means we will be able raise the bar for the solutions that we can provide in order to open up a whole new world of opportunities for customers to take advantage of next-generation technologies. That’s a big value proposition and it represents the future for our alliance. In Oklahoma, a ‘mad rush’ for vaccines soon faded. How more residents are once again booking shots. 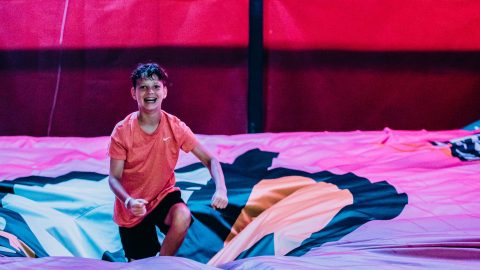