The usually sunny Flo is perturbed with Mara (yet again) during a work-from-home Progressive Insurance staff meeting over video. While seated at the computer, Mara is busy talking to someone at home. “Mara, you know you’re not on mute, right?” says Flo. “Oh, there’s a mute button?” the laconic Mara replies with genuine surprise.

During these months of work-from-home meetings, we all can relate. And Flo, of course, makes everything more relatable.

Progressive Insurance’s iconic spokesperson, portrayed by actress Stephanie Courtney, has not only been the star of Progressive’s TV ads since 2008, but also has a strong social media presence, including more than 4 million followers on Facebook. In fact, Progressive created a “Flo” chatbot to enable customers to interact with Flo on Facebook Messenger, as well as other channels, to help customers with basic insurance questions.

Now, Flo’s voice is being added to the chatbot, creating an even more personal experience for customers who adore the personable lady in the white apron.

“Flo obviously has been a staple and a highly recognized brand icon for Progressive,” says Matt White, technology and innovation manager in Progressive’s acquisition experience group. “We wanted the chatbot persona to be friendly and helpful to consumers in their path to purchasing insurance, and ultimately, in becoming customers of Progressive for what we hope will be decades.”

The Flo Chatbot runs on Microsoft Azure. Azure Bot Service and Azure Cognitive Services are among the services used to create the Flo Chatbot in 2017 and now, to give her a voice.

You can banter with the virtual version of Flo, if you like, and you’ll find she’s just as polite and matter-of-fact as she is in Progressive’s ads.

Ask Flo what her favorite movie is, and she responds, “I could try to pick a favorite, but we’d be here until next Tuesday.” Want to know her favorite food? “I could go for a taco right about now but was told I could only have one every hour.”

To get a behind-the-scenes look, we spoke with White to learn more about the Flo Chatbot with voice, Progressive’s work with Microsoft and what’s important when it comes to helping customers.

TRANSFORM: Tells us about the origins of the journey for Progressive, Flo and Microsoft.

As we’ve continued to learn about what it takes to build and maintain, and ideally excel, at conversational experiences, we wanted to learn: What does it take to integrate text to speech in a voice component?

The foundation of the bot itself is the Microsoft Bot Framework. What we’ve done is layered on another cognitive service, so we could take all that existing architecture and foundation, and layer in the text-to-speech service.

TRANSFORM: How does the Flo Chatbot help people now, and how will adding voice change things?

WHITE: The Flo chatbot is capable of a variety of different things. There’s a large question-and-answer functionality, from Insurance 101 kind of questions – “What does comprehensive mean?” “What does collision mean in terms of car insurance coverage?” – to if you have policy servicing questions, we can point you in the right direction.

If you’d like to get an insurance quote for a variety of products, with our subsequent releases of the Flo Chatbot, we’ll fully build out the ability for people to get a car insurance quote through the experience.

TRANSFORM: What are some of the wackiest questions the Flo chatbot has been asked?

You could say, well, it’s not really worth training answers on that, but people ask. The Microsoft tools certainly make it easy enough to train answers for those kinds of persona-based questions, or just chit-chat kind of questions. I think those are opportunities to delight consumers, so why wouldn’t we?

TRANSFORM: Is incorporating Flo’s personality and sense of humor in the chatbot difficult to do?

WHITE: No, not from a technical perspective. Thankfully, we have some very talented copywriters who are used to writing in the voice of Flo for various purposes.

You always want to be on the lookout for opportunities to delight, but not unintentionally create frustration. You want to be able to acknowledge frustration, too. There are times where some wit or humor is appropriate, depending on the user’s engagement and what they’re asking. And then there’re times when it should be just the facts, or empathy, to help. If someone chats with us and says they had a car accident, that’s not the time for talking about tacos and unicorns. You still want to be friendly and helpful but get them the information they need.

TRANSFORM: What have you learned about chatbots based on communications so far from customers?

There are lots of repetitive questions that a chatbot can certainly handle well – informational questions, point people to the right information. I frankly think it’s just as important to recognize the kinds of things where you really want customers connected to a live person.

One of the things we try and think about, too, is that we always want to provide an off-ramp; we want to avoid user frustration. So if the bot doesn’t understand, or doesn’t comprehend what the user might be asking, we have logic built in such that, rather than getting stuck in a loop, we offer a connection to a person who can help.

In addition to dealing with some of those repetitive questions and repetitive transactions, the chatbot has also helped surface those more complicated questions that you could envision potentially training the bot to handle, but you may not want to. It might make more sense to have a licensed insurance agent from Progressive handle those questions.

TRANSFORM: What are the benefits of using Azure Cognitive Services for the Flo chatbot?

WHITE: One advantage for us is the decoupled nature of the services. In other words, you can use what you need to use. You don’t have to use everything. We use a variety of services for natural language understanding – the LUIS service as well as QnA Maker. Those are two stand-alone services. We use them together, depending on the nature of the user’s question. Now we’re using the neural text-to-speech service that we’ve been able to kind of bolt on, if you will, to this so that we can bring voice to the experience.

Being able to integrate the bot framework, which lives in Azure, into our own kind of Progressive APIs to help answer questions or execute transactions has been one of the key advantages. You’re not locked into a huge suite of products. You can use the products that you need, and then you can layer in other products – your own or others, if needed.

Another advantage with the open-source nature of the Microsoft Bot Framework is that all these services are but an API call away. If you want to layer in a new experience, or tailored experience, or use a service, it’s easy to integrate those pieces on the foundation they’ve already built.

TRANSFORM: Are there other features that Progressive might want to add to the Flo chatbot in the future?

I think one of the things we’ll find as people get used to chatbots, and engage with them, they’re going to want to be able to do more things. So as those consumer demands grow, we’ll certainly grow with it.

TRANSFORM: It’s crucial to Microsoft that machine learning and artificial intelligence (AI) be used responsibly and ethically. What was your experience in those areas in developing the Flo chatbot?

WHITE: I appreciate Microsoft’s partnership on this front as well. The technology that is out there is incredibly powerful. You can train chatbots to do a lot of things that people can do, but just because we can, doesn’t mean we should. As I mentioned before, there are questions we could reasonably train the chatbot to answer, but that doesn’t mean that we should. It still might be better to get people to a live Progressive Insurance consultant to discuss their particular issue, concern or question.

I think that’s particularly true when you start introducing a character’s voice – but still a voice – and I thought Microsoft’s approach to that in ethics and AI has been very upfront and straightforward in terms of how we use it. It’s certainly been an approach consistent with Progressive’s own core values.

One of the things I appreciate from some of the disclosure that’s required – we want to make it sound real, we want to make it sound authentic, but we also want to be transparent that it’s not. And that’s actually a requirement from Microsoft – that even when you initially engage with the voice font on Google Assistant, as an example, we say upfront that this is a virtual version of Flo.

We want it to sound and act like Flo as much as it can, being a machine, but we want to be very transparent about what it is and what it isn’t. So when people ask, is this a bot, is it a person, we don’t try and pretend it’s a person. Right up front. We offer help if they want to speak to a live person, we can certainly get them there.

Visit the AI Blog to learn how Custom Neural Voice is bringing to life other iconic characters, like Bugs Bunny and the Duolingo crew. 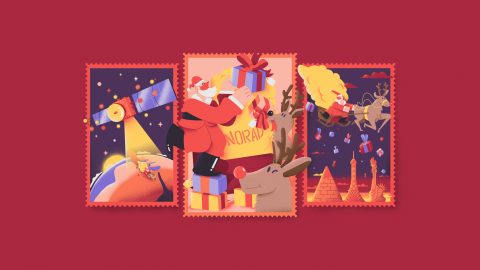 Here’s one jolly holiday tradition that cannot be stopped in 2020, courtesy of NORAD Health care workers have always loved Crocs; during the pandemic, Crocs loved them back