“Data” and “code” are both four-letter words. And, tech evangelist James Whittaker delights in wielding both provocatively when he describes a future that he says is closer than many of us think.

The colorful tech pioneer, distinguished engineer, public speaker, and author is abundantly optimistic about what is ahead and smiles wryly when asked about those who lack his enthusiasm for change.

“Some people look to the future and see only the present,” he says in an interview during a quick trip to Singapore –  one of Asia’s top tech hubs. “But it’s not going to be like that.”

Here are some of his big prophecies:

It is all just part of history unfolding. We have, he argues, been in and out of technological flux for years. Cast your mind back to the 1980s, which were dominated by massive mainframe corporate computers. PCs then made technology accessible in the 1990s. The internet connected us in the 2000s. And, now the mobility of the 2010s is going to give way to the what he calls the “autonomous” era of the 2020s. 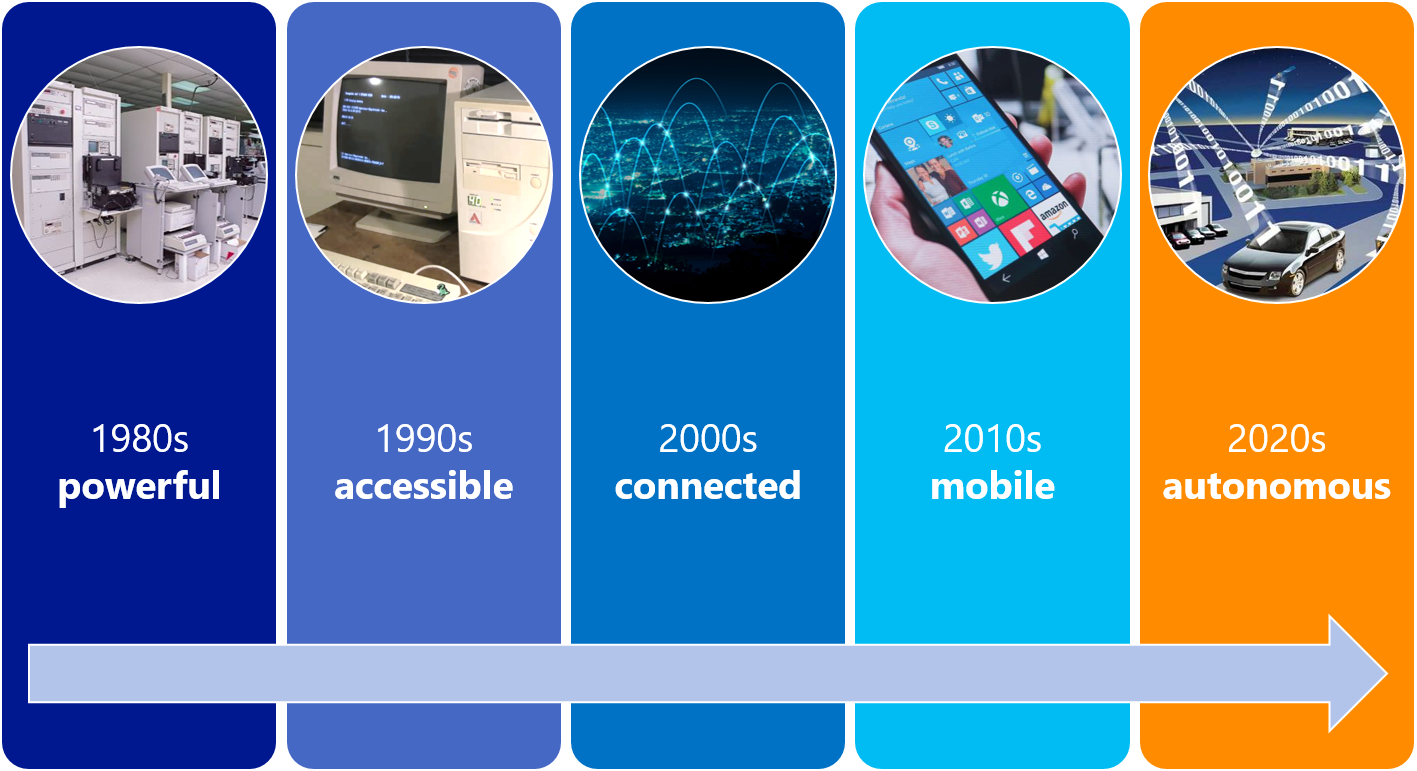 Things, he says, are going to start changing noticeably within the next five years, and will only accelerate. In many ways, the process has already kicked off. The cloud is in place and growing fast and data are being amassed at ever-increasing rates and aggregated in better, sharper and more potent ways.

“The real power behind all of this is the data being organized in the cloud,” says Whittaker who travels the world talking about the future and Microsoft’s significant and positive role in it.

The required technology has long been invented and developed. By around the turn of the next decade, the way we access information will start to alter radically. Many screen devices –  all but essential in our lives today – will begin to wane in popularity. Many of us will wear devices that keep track of what we say, do, react and feel. The same information will eventually be gathered by sensors built into everyday objects, like vehicles, houses, furniture, apparel and whatever. Mixed reality, which is now in its infancy, will come of age.

“User interfaces (UI) are mostly going to disappear over the next five years,” he says. “No typing, no searching, no getting a screen full of possibilities and having to left-swipe and right-swipe. Within five years, I think UI is going to mostly be voice, gestures, and data collected from sensors. The technology for this has existed for 10 years. People are still going to be carrying phones, but screens are going to be disappearing.”

Fading away too will be websites as personal bots become the norm. Bots will take on more and more communication and coordination functions on our behalf. They will scan and search data for us and offer up choices – and perhaps make some decisions –  for things like booking the most direct and best-value flight, recommending the right movie, and reserving a restaurant table. The list goes on. “You will be able to say: ‘Hey Cortana, book me and friend some time in the pub.’ And, my bot will arrange this by talking to my friend’s bot.”

Bots will also anticipate human needs. “For instance, when I arrive in Singapore in the future, ‘Singapore’ will know I am here and will suggest what I can do and experience.”

It will become commonplace for all sorts of machines to use algorithms to crunch through ever-growing chunks data and take on all sorts of day-to-day functions. This is the Internet of Things (IoT) in full flight. Of course, Whittaker is not alone in declaring that the IoT will change the way we work, learn, and play. However, he and his family in the United States are among the first to incorporate it into their lifestyle.  “My house is probably one of the smartest houses in the world,” he says proudly. “I wrote a lot of the code myself.”

His home can now autonomously monitor its own security, utility and other needs. It knows when someone visits while the family is away. It knows what appliances are on and how much electricity each is consuming – from the fridge to the microwave to the heating to the lights. It knew something was amiss in his kitchen days before a toaster shorted and burned out. Overall, Whittaker’s favorite smart appliance is his hot tub. He coded it to learn how to regulate the water temperature and tell when someone is using it. It has learned what chemicals are the best quality and value, and even when to buy them when they are on sale.

Beyond the home, data-fueled machines will take on a multitude of functions. Autonomous vehicles are now in development. Many manufacturers are already using robots on production lines and the construction industry is looking at efficiencies from new technologies. Also facing challenges will be service industries and professions, such as accountancy, the law, and even some in government and public administration, where strong data-based information should lead to more transparent decision-making.

“A lot of jobs are going to fall, and this time it is not just going to be blue-collar jobs,” he says. “Technology is taking over jobs, but that’s not a new phenomenon. You can think of (the film company) Eastman Kodak with hundreds of thousands of jobs – the photography industry, the film developing industry – all were taken out by a digital format that they themselves had invented,” he says.

“Technology has created more jobs than it has destroyed over (the course of) history and it does so by having people skill up. There are lot more people majoring in computer science now than when Eastman Kodak ruled the world.”

For Whittaker, medicine and healthcare will become new data-driven frontiers. He sees major advances in diagnosis, drugs and clinical treatments. Potentially big leaps in research could lead to a better understanding of how the brain works or how to prevent cancer.

So how should we ride this wave of change? Whittaker has some blunt advice for today’s students, their parents, as well as anyone looking to further their careers in the digital world: “Learn to code. I think coding should be standard issue in any school anywhere. The ability to code is going to be a huge advantage in the future – even the ability to understand code.”

Finally, he does not buy into notions that technology will one day make humans obsolete. That is because he doubts machines will ever be able to do one very human thing: be creative. He even wrote a book about it.

“Creativity is incredibly important,” he says. “It is really going to matter. I don’t see a path to creativity for machines.”